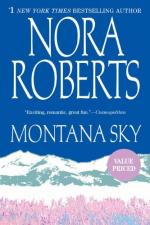 Nora Roberts
This Study Guide consists of approximately 48 pages of chapter summaries, quotes, character analysis, themes, and more - everything you need to sharpen your knowledge of Montana Sky.

This detailed literature summary also contains Topics for Discussion and a Free Quiz on Montana Sky by Nora Roberts.

Montana Sky, by Nora Roberts, tells the tale of three sisters, the daughters of Jack Mercy. Upon the death of their father, Willa, Lily and Tess Mercy are thrown together on Mercy Ranch, where they must live together for a year in order to inherit the land.

Willa Mercy, the youngest daughter, has grown up on the ranch, struggling to please her unbending father. Upon his death Willa steps into the role as the owner, only to find that her father has other plans. Willa learns at the reading of the will that unless the two sisters she has never known live on the ranch for one year the land will be given to a nature conservatory and all will be lost. Willa is devastated, not only because her life is now in the hands of two strangers, but also because it is now clear that she does not matter to her father any more than the daughters he cast aside.

Lily Mercy, the middle child, is happy to stay, if only to escape her abusive ex-husband. Shy and nervous, Lily appreciates the beauty of the land and is immediately drawn to Adam Wolfchild, Willa's half brother. The two develop an instant attraction, one that Adam is patient to see to its fruition.

Tess Mercy is not at all willing to give up her glamorous life in California, but does so when she realizes the fortune that is at stake.

The three sisters move into the main house and struggle in their relationships with each other. Lily is the peacemaker, always trying to do for others and make others happy. Willa has no use for either sister, and continues to run the ranch while running herself into the ground. Tess does what she can to contribute while butting heads with Willa constantly. As time passes however, all of the sisters develop a grudging respect for each other.

Things change on the ranch when animals are found slaughtered in the mountains and then closer to the ranch. When Adam's cat is found headless on the steps of the main house it is clear that someone is trying to send a message to the women of Mercy. Whatever the message may be, the three sisters band together, vowing to see things through. The three men in their lives stand with them, making for a stronger team.

Willa struggles with her attraction to Ben McKinnon, a neighboring rancher who her father had wanted her to marry simply to join the properties. Lily and Adam are clearly falling in love and Tess has a passionate affair with Nate, a friend and Willa's lawyer. Together the three men, friends for years, vow to watch out for the women they care for.

Lily's ex-husband appears on scene, working on the neighboring ranch and keeping an eye on his ex. Jesse Cooke is angry that Lily would try and leave him and vows to get back what is his. When Jesse discovers the inheritance that Lily will receive he decides to wait to reclaim her. This changes when Jesse discovers that Lily and Adam are planning to be married. Jesse's anger and the killings that are taking place lead the reader to believe that Cooke is responsible for the destruction around Mercy. This changes when Jesse is found dead after kidnapping Lily, killed in the same manner as the ranch hand and the hitchhiker that were found dead; stabbed and scalped, on Mercy land.

Willa struggles to keep her sisters safe and run the ranch, sometimes angering those she cares for. After an argument with Ham, the foreman who more or less raised her, Willa discovers Ham injured and Jim Brewster, another man who has worked the ranch forever, standing over the body.

Jim stuns Willa by telling her that he is her brother, the illegitimate son of Jack Mercy. Brewster takes Willa into the mountains so that he can explain why he has been killing, first animals, and then people. Jim's anger at never being acknowledged by their father, and then left out of the will has caused him to snap. At first killing animals was simply to channel his anger but he discovered not only that he liked it, but that it upset the people living on the ranch. Jim tried at first to scare away Lily and Tess, figuring that if he couldn't have the ranch then no one would. Things changed for Jim when he rescued Lily from Jesse, killing the man who had hurt his sister. Deciding that being a hero was better, Jim simply wants Willa to tell the others that she was taken and Jim saved her. Though Willa agrees Jim declares that she is lying and prepares to kill her as well. Ben arrives and kills Jim, saving the woman he loves, and ending the horrors that have been taking place for the past year.

The three Mercy daughters, now sisters and a united family finally find happiness on Mercy Ranch, their home. Willa and Ben will be married, as Lily and Adam are, now expecting a child. Tess, despite her assurances that she would not stay, makes it as far as the airport before realizing that she would be leaving happiness behind in the form or her sisters and the man she loves. In the end, despite the lack of love that Jack Mercy had for anyone, love returns to the ranch, this time to stay.

More summaries and resources for teaching or studying Montana Sky.