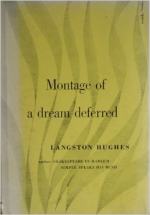 Introduction & Overview of Montage of a Dream Deferred

Langston Hughes
This Study Guide consists of approximately 30 pages of chapter summaries, quotes, character analysis, themes, and more - everything you need to sharpen your knowledge of Montage of a Dream Deferred.

Montage of a Dream Deferred Summary & Study Guide includes comprehensive information and analysis to help you understand the book. This study guide contains the following sections:

This detailed literature summary also contains Bibliography on Montage of a Dream Deferred by Langston Hughes.

"What happens to a dream deferred?" That question—one of the most famous lines of poetry to issue from the pen of an American writer—captures the essence of Langston Hughes's 1951 work Montage of a Dream Deferred. In this tightly interwoven collection, the "dream deferred" is the collective dream of the African Americans. Although slavery was abolished nearly a century before, black Americans in the 1940s and 1950s were still not seen as equals in the eyes of the general public nor, often, in the eyes of local and state lawmakers. While white Americans were riding a wave of post-World War II prosperity toward the fulfillment of their vision of the American dream, most blacks were left waiting for their opportunity to join in the country's success.

A montage is an artistic work that consists of smaller pieces of art combined into a unified whole that reveals a larger picture or meaning. This is an accurate description of Montage of a Dream Deferred, which Hughes preferred to think of as a single, book-length poem. Recurring themes and phrases occur throughout the smaller poetic works that make up the book; in fact, the book begins and ends with the same two lines: "Good morning, daddy! / Ain't you heard?"

Montage of a Dream Deferred is, in addition to being a statement about denied opportunities for African Americans, a rich portrayal of the places and personalities that make up the New York neighborhood of Harlem where Hughes lived. According to biographer Arnold Rampersad, from the vantage point of his Harlem home, "Hughes watched the historic evolution of African American culture from its roots in the rural South to its often tangled exfoliation in the cities of the North." More importantly, he documented this evolution for the entertainment and enlightenment of both current and future generations.

One of the most notable stylistic elements of Montage of a Dream Deferred is Hughes's use of jazz and bebop musical techniques to infuse his poems with a spirit that is uniquely African American. This includes the use of irregular rhythms and onomatopoetic bursts of sound such as "pop-a-da!" For Hughes, jazz music represented the beating heart of the African American experience. As he wrote in The Big Sea: An Autobiography in 1940:

Langston Hughes is beloved for writing poetry, prose, drama, and nonfiction over his four-decade career. His single most famous poem is probably "The Negro Speaks of Rivers," written when he was a teenager, but his most famous concept resonates throughout Montage of a Dream Deferred. Though the book is not currently in print as a stand-alone work, it can be found as part of The Collected Poems of Langston Hughes, a mammoth anthology of the poet's professional works, edited by Arnold Rampersad and published by Knopf.

More summaries and resources for teaching or studying Montage of a Dream Deferred.

Montage of a Dream Deferred from BookRags. (c)2021 BookRags, Inc. All rights reserved.