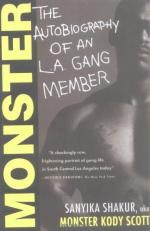 Monster: The Autobiography of an L.A. Gang Member Quotes

"How I expected to get away with flashing on a photograph is beyond me! But, too, it points up my serious intent even then. For I was completely sold on becoming a gang member." Kody in sixth grade, Initiation, Page 4

"Upon further contemplation, I felt that they were too easy to kill. Why had they been out there? I tried every conceivable alibi within the realm of reason to justify my actions. There was none. I slept very little that night. I've never told anyone of these feelings before." - Kody after the murders of his gang initiation, Initiation, Page 13

"I had been to five funerals in the previous two years and had been steeled by seeing people whom I had laughed and joked with, played and eaten with, dead in a casket. Revenge was my every thought." Boys to Men, Page 52

"Certainly I had little respect for...

Monster: The Autobiography of an L.A. Gang Member from BookRags. (c)2022 BookRags, Inc. All rights reserved.