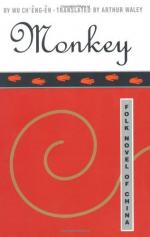 This detailed literature summary also contains Topics for Discussion and a Free Quiz on Monkey by Wu Cheng'en.

Monkey by Wu Ch'eng-en and translated by Arthur Waley is a story about the Stone Monkey King and his journey, along with Hsuan Tsang and others, to get scrolls from Buddha's paradise in India and take them back to China. Along the way the group must fight demons, Immortals, save the innocent, and walk the path of Buddha without fail.

The Stone Monkey was born of a stone that was worked on by Heaven and Earth. The Stone Monkey lived with the other monkeys and soon was able to make himself king of the monkeys. He is happy being king until he thinks of his own mortality and goes in search of religion that he may find a way to cheat death. He finds a patriarch who is willing to teach him, and in the process Monkey learns many different kinds of magic. Soon he is showing off in front of the other students, and Monkey is banished back to his home. His powers are great and when he returns home he kills a demon to free the other monkeys. Soon he is getting himself into mischief and finds that the Jade Emperor, King of Heaven, has declared war on the Stone Monkey.

The Stone Monkey is unable to be beaten and when captured his body becomes hard as a diamond from all the magic that he has stolen; he cannot be killed. Buddha comes to help the Jade Emperor and is able to trick the Stone Monkey and trap him under a mountain where he is to stay until someone comes along to save him.

Many years later a Bodhisattva named Kuan-yin goes to look for a scripture-seeker that will take scriptures to the far away lands and save many souls. This scripture-seeker is a monk named Hsuan Tsang who is given the name "Tripitaka" when he agrees to take on the journey. As he travels along, he comes to the Stone Monkey that has been trapped under the mountain for five-hundred years. Tripitaka frees Monkey and takes him with him as a disciple of Buddha. They also encounter other beings along the way that join them in the quest to travel to India to bring sacred scrolls back to China, including Pigsy, Sandy, and the dragon king's son.

The Journey takes more than seven years and they have many calamities along the way and are forced to battle Immortals, monsters, ogres and many others. At the end they are able to get the scriptures and take them to China. Their reward is enlightenment and living in Buddha's paradise.