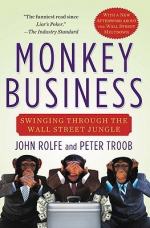 John Rolfe (author)
This Study Guide consists of approximately 31 pages of chapter summaries, quotes, character analysis, themes, and more - everything you need to sharpen your knowledge of Monkey Business.

This detailed literature summary also contains Topics for Discussion and a Free Quiz on Monkey Business: Swinging Through the Wall Street Jungle by John Rolfe (author).

John Rolfe and Peter Troob were young, ambitious, and bright. Both had entered MBA programs at superior universities, and both were thrilled when Donaldson, Lufkin and Jenrette (DLJ) offered them permanent positions as associate investment bankers. They would enter the world of Wall Street with large salaries, bonuses, excessive expense accounts, and the dream of eventual seven-figure incomes as vice-presidents and/or managing directors. They would simply have to "pay their dues" as associates first, and that seemed a small price to pay for such a future. As they immersed themselves into their positions, however, it soon became evident that life as an associate was not as described during their interviews. Fourteen-to-sixteen hours a day, seven days a week, was the price, as they became the "slaves" to vice-presidents and managing directors who demanded research, pitch books, and prospectii, revisions of which occurred up until the final hours prior to presentation to clients. Slowly, realization dawned. They were not on a desert, crossing to the oasis of opulence; rather, they were in a jungle, swinging from tree to tree with every other associate investment banker on Wall Street, and the trees all began to look the same.

To numb themselves, Rolfe and Troob engaged in group therapy dinners with fellow associates, ordered in because no one could leave for the night, followed by drunken excursions to local strip clubs, once an evening's work was finally completed. Time for meaningful social activities and relationships was non-existent, and this was especially difficult for Troob, who had a significant other in Chicago whom he rarely saw. The exotic international travel at company expense, one of the perks they initially coveted, turned into burning through time zones, exhaustion, and sightseeing through the windows of cabs and limos. All-nighters were common, as superiors, from the comfort of their homes, called, emailed, or faxed constant revisions to documents, which associates then had to push through word processing and the copy center, using bribes to do so. Clearly, serious reflection was needed. Troob was the first to turn disenchantment into a search for another career, and he moved on to a management position with a hedge fund. Here he found normal hours and the opportunity to use his critical and creative intellectual skills to actually make decisions about investments. Rolfe's search was a a bit longer, but he, too, found a spot with a hedge fund. Both lead normal lives now, perhaps without as much "fruit" in their arms as those who have remained in the jungle. They do, however, have the time to eat it.

More summaries and resources for teaching or studying Monkey Business: Swinging Through the Wall Street Jungle.