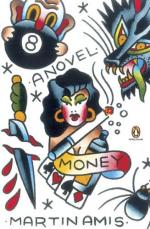 Martin Amis
This Study Guide consists of approximately 32 pages of chapter summaries, quotes, character analysis, themes, and more - everything you need to sharpen your knowledge of Money.

This detailed literature summary also contains Topics for Discussion and a Free Quiz on Money: A Suicide Note by Martin Amis.

The fiction novel, Money, begins with a note from author, Martin Amis, describing the book as a suicide note from the main character, John Self. However, he does not know if Self will actually die by the end of the novel. John Self is the director of a movie, and this is the reason he came to New York City. He thinks about the people who owe him money, including Selina Street, his girlfriend. Caduta Massi and Lorne Guyland, two actors in the film, call John with their trivial problems. His friend, Alec Llewellyn, tells him that Selina Street is sleeping with someone else. John Self goes to meet Fielding Goodney, his money man, at a bar in the Carraway Hotel. They talk about money, and John believes Selina is not sleeping with Alec because Alec has no money. After they leave, John Self finds a prostitute, but cannot go through with it when he finds out she is pregnant. He sits and talks to her, and pays her. A man calls, and says John Self has messed up his life.

Doris Arthur, the writer, arrives to meet with John Self. John Self says the movie is about a father, mother, son and a mistress. The son and his father share the mistress, but the father does not know the son is also sleeping with her. The mistress has mob connections, and they all work at a restaurant or bar. They receive a delivery of flour that is really heroin, and the father wants to give it back to the mob. He receives a letter from Selina, begging him to take her back, and noting she has no money. John runs into Martin Amis and tries to make small talk, but Martin does not seem to want to talk to him. John meets with the actors, and the film gets underway. John gets drunk and goes to see Martina Twain at her house late at night, but her husband Ossie tells John to leave. A mysterious man, called Frank the Phone, calls regularly to harass John. John gets Amis to rewrite the screenplay. He learns Selina is cheating on him with Ossie, and Selina leaves him. John starts dating Martina, but Selina orchestrates a meeting and Martina catches her and John in bed. John finds out he is broke, and Fielding Goodney has been using John's money to pay for the film as part of a revenge scheme. John returns to London, where he learns the man he thought was his father, Barry Self, is not, and a man named Fat Vince is. He finds a new girlfriend and moves on with his life.

More summaries and resources for teaching or studying Money: A Suicide Note.