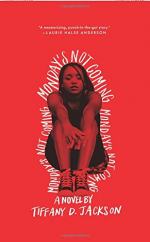 Tiffany D Jackson
This Study Guide consists of approximately 41 pages of chapter summaries, quotes, character analysis, themes, and more - everything you need to sharpen your knowledge of Monday's Not Coming.

This detailed literature summary also contains Quotes and a Free Quiz on Monday's Not Coming by Tiffany D Jackson.

The following version of this book was used to create this study guide: Jackson, Tiffany D. Monday’s Not Coming. Katherine Tegen Books, 2018.

Claudia Coleman reflected on the disappearance of her best friend, Monday Charles, over several months over three main timelines: “The Before,” “One Year Before the Before,” and “The After.” During “The Before,” Claudia returned home after spending the summer with her grandmother and could not get in touch with Monday. She went to the first day of eighth grade and Monday was not there. She visited Monday’s house in the poor Ed Borough complex and Monday’s mother yelled at her to leave. After several weeks, Claudia confided in her favorite teacher, Ms. Valente, and they learned that Monday’s family was no longer registered at the school. Claudia ran into Monday’s older sister April, who told her to stay away. She learned that Monday had a social worker. She convinced her mother to take her to Monday’s house, but Mrs. Charles just said that Claudia had already visited and that Monday was at her father’s.

Meanwhile, Claudia struggled in school and learned that she had dyslexia. She began going to the Learning Center for academic help, but resented it because she thought that her peers would judge her for being stupid. Monday had always helped her with her assignments before. Claudia retrieved the retired school nurse’s phone number and called her about Monday. Ms. Valente called social services on Mrs. Charles after visiting their home, but they claimed that everyone was accounted for. Claudia went to Ed Borough and April showed her Monday’s room. Mrs. Charles arrived and Claudia hid under Monday’s bed for hours. She eventually snuck out by jumping out of the bathroom window.

During “One Year Before the Before,” Claudia and Monday hung out and danced together. Monday had a crush on a boy in their class, Jacob Miller. They began seeing each other, but Jacob would not publicly announce their relationship. Throughout this time, Claudia noticed bruises on Monday’s body that she tried to hide. Jacob began a rumor that Monday and Claudia were lesbians, so Monday started a fight with him in school that had her and Claudia end up at the principal’s office. The next time Monday went to school, she was in the same clothes and smelled like pee. She stopped picking up her little brother August after school because she claimed he was sick at home for weeks. Monday dyed her hair poorly in an attempt to impress Jacob and ran out of class with shame. Claudia went to the bathroom to console Monday, who began crying and wiped her face on Claudia’s skirt. Someone took a picture of them and posted it on Facebook, claiming that they were lesbians.

During “The After,” Claudia’s mother convinced Claudia to go to the church’s Halloween Harvest Party. She met her old friend Michael, but realized that her mother had asked him to spend time with her. Claudia began to attend tutoring. Michael invited her to go to the mall with him. Later, Claudia and Michael went to a basketball game at Michael’s high school. Claudia went to a party with her friend Megan from dance class, where she encountered Michael, Jacob, and April. April insisted that Monday was not coming back. Claudia and Michael kissed.

Claudia found Monday’s old copy of The Flowers in the Attic, which she returned to the library, then looked at Monday’s book borrowing history. She realized that Monday had been leaving cryptic clues for her. She and Michael went to visit Monday’s dad, who would not see them. Suddenly, Claudia remembered that Monday was dead. She returned home and her mother filled her in: Monday had died two years ago after being stuffed in her freezer, alongside August. Claudia kept having episodes where she forgot about what had happened. Currently, Claudia was sixteen years old and her parents had taken her out of school for the past year. She began to read up on old reports of Monday’s death to fill in the gaps she forgot about. She visited Ed Borough for closure. She could still hear the buzzing of the freezer from Mrs. Charles’ house, but learned, in the end, to think of it as a song, to which Monday hummed along.

More summaries and resources for teaching or studying Monday's Not Coming.