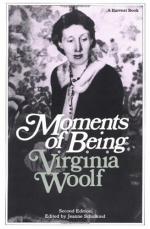 Moments of Being Summary & Study Guide

Virginia Woolf
This Study Guide consists of approximately 33 pages of chapter summaries, quotes, character analysis, themes, and more - everything you need to sharpen your knowledge of Moments of Being.

Moments of Being Summary & Study Guide includes comprehensive information and analysis to help you understand the book. This study guide contains the following sections:

This detailed literature summary also contains Topics for Discussion and a Free Quiz on Moments of Being by Virginia Woolf.

Moments of Being consists of a collection of several previously unpublished writings by the renowned, and often controversial, British novelist, Virginia Woolf. Written at various periods of her life and with various personal intentions, the writings essentially explore Woolf's relationship with her past - specifically, her belief that the past can, and should, be a source of personal and creative truth.

The book begins with an extensive introduction by the editor, who presents and develops the thesis that Virginia Woolf's memories of her childhood, and eventually of her adult life, provided substantial material not only for the many novels she wrote but also for her extensive, ongoing self-examination and analysis. The editor also discusses the points in Woolf's life and career at which the various writings were undertaken, commenting on the relationship between level of professional achievement, quality of writing and purpose for writing.

The first section is titled "Reminiscences," and according to the editor was written when Woolf was in her twenties and just beginning her writing career. The editor suggests that Woolf had two main reasons for writing "Reminiscences"— to practice digging into her past for personal and ultimately human truths and to practice using words to shape and define those truths. The content of "Reminiscences" consists almost exclusively of Woolf's recollections of her childhood, particularly her intense, idealized views of her mother, who died when Woolf was barely into her teens and whose presence in Woolf's mind is ongoing and almost inescapable.

The second section is titled "A Sketch of the Past." In an introduction, the editor points out that while it was written late in Woolf's career (when she was an established and well-known writer), its content is essentially that of "Reminiscences"—the product of Woolf's intense and ongoing focus on recalling and understanding her childhood. The idealized portraits of family and friends that characterized "Reminiscences" are tempered in "A Sketch..." with a more realistic perspective. Woolf's mother in particular is less idealized and much more of a multi-faceted, flawed human being. There is also an additional layer of context here; while the present in which Virginia Woolf is living and writing plays almost no role in "Reminiscences," in "A Sketch..." it's very apparent that Woolf is living at a very uncomfortable time when World War II is raging.

The third section of the book is headed "The Memoir Club Contributions,", and contains writings intended for a very particular audience - a group of intellectual, liberal and broad-minded family and friends that seemed, as a group, to be interested in exploring and defining new ways of being and living. The writing here reflects this shift in narrative purpose. Where the writing of both "Reminiscences" and "A Sketch..." is relatively free flowing, almost experimental, the writing of "The Memoir Club Contributions" is much more shaped and purposeful. Three essays make up "The...Contributions.". The first, "22 Hyde Park Gate," is yet another consideration of Woolf's childhood. The second,"Old Bloomsbury," is a celebration of the immensely liberating experience lived by Woolf when she finally moved out of her childhood home and into a more relaxed, freer environment. In the third, "Am I a Snob?" Woolf emphasizes, for the first and only time in the book, her experience of her present life, as opposed to her experience, and understanding, of her past.

More summaries and resources for teaching or studying Moments of Being.

Moments of Being from BookRags. (c)2022 BookRags, Inc. All rights reserved.