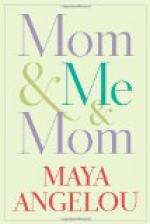 Maya Angelou
This Study Guide consists of approximately 34 pages of chapter summaries, quotes, character analysis, themes, and more - everything you need to sharpen your knowledge of Mom & Me & Mom.

This detailed literature summary also contains Topics for Discussion on Mom & Me & Mom by Maya Angelou.

"Mom & Me & Mom" by Maya Angelou is a memoir about the celebrated poet’s relationship with her mother, Vivian Baxter. Vivian’s parents were from Trinidad. Her father had stowed away on a banana boat and landed in Florida. He and his wife had six children. Her father was a man who believed in standing up for oneself and resorting to violence when necessary. He taught Vivian, the oldest, to fight like a boy. He depended on her to teach his sons how to fight and win.

Vivian met and married Bailey Johnson who was a veteran of World War I. The family was disappointed. They had high hopes for Vivian. They wanted her to marry a professional man – a doctor or lawyer. Bailey was just a fry cook. But, Vivian was strong-willed; so, she married him anyway. They had a son, Bailey, Jr., who was followed five years later by their daughter, Maya. Vivian was a young, beautiful woman who wanted excitement in her life. She didn’t have time for kids. Besides she and Bailey, Sr., had grown apart since the kids were born. She decided to ship the kids off when Maya was just one. They went to live with their paternal grandmother in a small town in Arkansas called Stamps.

Annie Henderson was a kind, soft-spoken woman who took the kids into her home. She was the polar opposite of vivacious, aggressive Vivian. Maya and her brother lived with Annie for ten years. But, when Annie saw that fifteen-year-old Bailey was being harassed in the small racist town, she knew it was time for the kids to reunite with their mother in the more liberal city of San Francisco.

Although one part of Bailey idolized his mother, he had a lot of old resentments, too. To Maya, she was a complete stranger. Maya didn’t remember a thing about her. Her heart was broken because she missed her small town and her gentle grandmother. Vivian was young and loud and laughed all the time and danced around to jazz music in the living room. Maya found her unappealing and could not for the longest time bring herself to call her “Mother.”

Vivian was smart and knew what was going on with her daughter. She was patient and understanding. As the years passed, Vivian tried to prove herself again and again. She was a friend to Maya, and she wanted to become a good mother. Although Vivian’s aggressive and even violent tendencies were off-putting to Maya, the young girl came to understand and admire her mother.

Maya had the best of both worlds. She had a kind grandmother to look after her when she was young and a boisterous, proud mother to raise her from age ten. Vivian taught Maya to speak up for herself and never compromise her values. The relationship that Maya had with her mother became the strongest of her life. The two women truly loved each other. The abandonment was part of their story. but so was the strength that Vivian taught Maya to have and the risk-taking that Vivian taught Maya to seek. Had Maya not had this unique upbringing, the world probably would have never known her as a celebrated poet, writer, and activist.

More summaries and resources for teaching or studying Mom & Me & Mom.