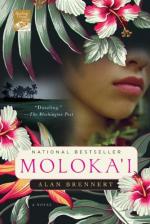 Alan Brennert
This Study Guide consists of approximately 44 pages of chapter summaries, quotes, character analysis, themes, and more - everything you need to sharpen your knowledge of Moloka'i.

This detailed literature summary also contains Topics for Discussion and a Free Quiz on Moloka'i by Alan Brennert.

The novel Moloka'i tells a story full of tragedy and hope that spans seventy-nine years of history. Most of the novel takes place in the Kalaupapa Peninsula of the island of Moloka'i, a place infamous for being the location of a settlement where people with leprosy were detained. The story focuses on the life of Rachel Kalama and covers the course of her life.

Rachel's story begins in 1891. She has a happy childhood, surrounded by loving family. Rachel's favorite uncle is arrested by a health inspector, called "bounty hunters" by many Hawaiians, and soon thereafter Rachel too develops leprosy symptoms. When her symptoms are discovered at school, she is sent to Kahili Receiving Station for several months, and then Rachel is sent to the leprosy settlement at Kalaupapa on the island of Moloka'i.

Adjustment to the life at the settlement is difficult at first, and the local religious authorities believe it is their duty to oversee her moral upbringing. They force Rachel to live in a school for girls called Bishop Home. Despite being required to live at Bishop Home, Rachel forms a bond with Haleola. Haleola functions as a kahuna, a faith healer, and she becomes a maternal figure to Rachel.

Rachel's leprosy shows few outward signs during much of her life, and she develops into a beautiful and athletic teen. Despite being a resident of the settlement, Rachel faces many of the same challenges as any other teen or young adult, but she overcomes them and finds her place in the adult world. Through it all, Rachel maintains the dream that her leprosy will one day be cured, and she follows all the advice of the medical personnel and even volunteers for all of their experimental treatments. Rachel meets a young man who displays the same rancor and rebellion she did when first sent to the colony. After saving him from drowning, she begins a conversation and a friendship. Eventually she marries Kenji.

Early in their marriage they have a daughter. The pregnancy is unintentional, and even though the baby is born healthy, her arrival adds another element of tragedy to Rachel and Kenji's lives. It is government policy to take away all babies born to leprous parents.

Rachel and Kenji grow into middle age and have a loving and happy marriage despite their medical conditions. Kenji is killed while trying to help another settlement resident, and Rachel loses the will to live. Her leprosy worsens over the course of many months, and she spends all of her time in a hospital room. Rachel does not expect to live much longer when doctors say they would like to try a new drug. Within three months Rachel has recovered, and soon thereafter she is granted release.

For the first time since she was seven years old Rachel can see the outside world. She does not see anything she recognizes, but she is delighted to experience all she can. Rachel reunites with her sister and discovers that they did not intentionally abandon her. They suffered a tragedy of their own and mistakenly believed Rachel was dead all these years. Rachel also manages to meet the woman the baby she had to surrender has become. In her last twenty years of life, Rachel traveled extensively throughout the world. Her funeral takes place in 1970 in Kalaupapa.