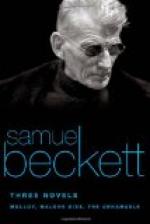 Samuel Beckett
This Study Guide consists of approximately 40 pages of chapter summaries, quotes, character analysis, themes, and more - everything you need to sharpen your knowledge of Molloy.

For Molloy, the stones that he sucks on symbolize his desire for order in a world that feels arbitrary and chaotic. The scene at the seaside, where Molloy calculates a system to avoid sucking on the same stone twice, is an attempt on his part to impose a semblance of method to counter his general feeling of meaninglessness. Relatedly, it can be seen as a source of comfort for Molloy; he sucks on a stone at the police station, and remarks that doing so kills hunger, thirst, and is essentially soothing.

The ditch symbolizes the desire for relief from life's burdens. Throughout Molloy's section, he frequently ends up in a ditch, sometimes by choice and sometimes naturally (as in the end). It simultaneously signifies a peaceful break from the sufferings of existence, and the state of existence itself, that we are all somehow mired...

More summaries and resources for teaching or studying Molloy (novel).