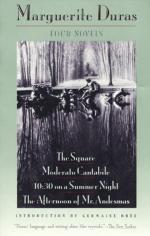 The novelette is set in a small seaside town. The town has three factories, a dock, a port area, and at least one six-story apartment complex near a cafe. The town's population is probably about 8,000 individuals. The town is laid out with a central working-class district near the port facility and a very long, straight street running East-West along the seacoast to an affluent part of town. The rich section of town is noted as being very old and established. The affluent area is surrounded on the North and probably East sides by a series of sandy dunes that lead down to the sea. The location of the town is not specified. Based on the local language, probably French, the food served, the weather, and the flora described the town is probably on the Mediterranean cost of France.

Giraud's apartment is located on...