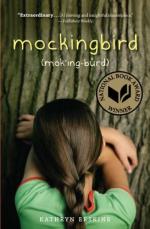 Kathryn Erskine
This Study Guide consists of approximately 33 pages of chapter summaries, quotes, character analysis, themes, and more - everything you need to sharpen your knowledge of Mockingbird.

This is a sensitively-written story of the human heart's ability to repair itself from loss and tragedy and to reinvest in life. The author says it was inspired by the 2007 campus shootings of 33 people at Virginia Tech University in Blacksburg, Virginia. It answers the unspoken question that follows such a horrific event: what could be worse than this? In the story of Caitlin Smith, the answer is "a lot." Caitlin is a 10-year-old pre-adolescent with Asperger's Syndrome; her mother has died years before; her brother Devon is killed in a random shooting at his school, along with a teacher and another student. Already withdrawn and painfully shy, Caitlin is pushed to the very edge of insanity by the loss of her beloved brother. Her surviving father is practically paralyzed by his grief and pain, and often unavailable to Caitlin emotionally. The horrendously destructive effects of gun violence are rendered in heartbreaking detail and with real compassion.

The reader witnesses Caitlin developing empathy toward her shattered father, who can sit for hours speechless on the sofa staring off into space. As she begins to see and feel his shock and pain, she can identify the same feelings within herself. This personal growth for Caitlin is largely spontaneous, although it does correspond to some of the teachings she receives from Mrs. Brook, a special education teacher at school. Caitlin is encouraged to look at the person who is speaking to her, to recognize her own feelings and how her behavior affects others. Caitlin is helped in this direction, too, by an art teacher who encourages her to express whatever she is feeling through creativity.

She is constantly coached in the importance of empathy and given the message that she ought to seek "closure" on her brother's murder and her feelings connected to that violent crime. In the beginning of the book, Caitlin withdraws from all forms of human contact; by the end of the story she seeks out human companionship. Her transformation is what eventually draws her father out of the prison of his own suffering and helps to make a foundation for their healing. The reader feels that Caitlin and her father will not only survive, but prevail over, their mutual losses. In this process of healing, both father and daughter are transfigured spiritually.

More summaries and resources for teaching or studying Mockingbird.