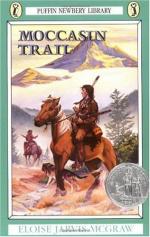 Eloise McGraw
This Study Guide consists of approximately 34 pages of chapter summaries, quotes, character analysis, themes, and more - everything you need to sharpen your knowledge of Moccasin Trail.

This detailed literature summary also contains Topics for Discussion and a Free Quiz on Moccasin Trail by Eloise McGraw.

As a child, Jim Keath listens to the stories of his uncle who is a mountain man. When he is still very young, he runs away from home, following his uncle with the intention of becoming a mountain man himself. But Jim is attacked by a grizzly bear and the other whites leave him behind. Jim manages to kill the grizzly but is seriously wounded. He is taken in by a group of Indians and nursed back to health. By the time he is well, he has been accepted into the tribe and he soon finds himself adapting to the lifestyle. Jim participates in all aspects of the Indian life, including joining raiding parties. But one day a party returns to camp with scalps, one the color of Jim's mother's hair. Stricken by memories of his white family, he suddenly feels torn loyalties toward his white and Indian families. This prompts Jim to leave the Indian tribe and go into the mountains. There he is befriended by a mountain man named Tom Rivers. Tom and Jim trap beaver together until the day Tom announces that he plans to leave the mountains. Jim decides the only option available to him is to return to the Indians. But on the night before they break camp, a traveler arrives with a letter for Jim. Jim is unable to read but from the few words Tom can understand, Jim realizes that the letter is from his brother, Jonnie.

Jim and Tom part ways with Jim going in search of someone who can read the letter. He finds a settlement and a man who knows Jonnie immediately sees the brothers' resemblance. Jim and Jonnie reconnect and Jim discovers that their parents are dead. Jonnie is taking his younger brother and sister to homestead but at seventeen, he is too young to claim land for himself. Jim agrees to go along with the family in order to claim land for them.

Sally, Jim's sister who is just younger than Jonnie, is immediately distrustful of Jim because of the way he dresses. Jim has little tolerance for the white way of life. The youngest of the family, Daniel, is enamored with Jim and seeks to emulate his ways.

When the family arrives and Jonnie has chosen the homestead spot, the family settles in to make a home. Jim chafes under the need to build a shelter and clear land for farming and doesn't understand Jonnie's pride of accomplishment with each completed task. Jonnie presses for the work to go more quickly and Daniel is soon torn between the demands of Jonnie and his desire to be like Jim. Daniel runs away and it's a concerted effort that locates the little boy and returns him to the fold. Jim realizes that Daniel could easily have died during his time away from the family and finally understands that he wants desperately to fit in with the white family. Jonnie and Sally realize that they have to accept Jim as he is if they want him to remain with the family.

More summaries and resources for teaching or studying Moccasin Trail.