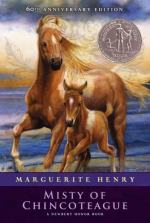 This detailed literature summary also contains Quotes and a Free Quiz on Misty of Chincoteague by Marguerite Henry.

Off the coast of Virginia in the 1300s a Spanish Galleon is shipwrecked on an island called Assategue Island. The ship is carrying horses as cargo from Peru to be sold at the market in the new world. The horses survive the shipwreck and thrive on the island and live through the decades eventually becoming feral horses with shaggy coats. Humans eventually make their homes on the sister island across the channel.

In the mid 1900s Paul and Maureen, who are brother and sister, spy the fabled Phantom, a horse that has eluded the pony round up several years in a row. Paul vows to catch her the next year since he is old enough to attend the round up. They both decide to save up money to buy her for themselves so they won’t have to sell her. The following months they do odd jobs and work for their grandparents to make money. They live with their grandparents because their parents are missionaries in China.

When the round-up comes around the following year, Paul goes to ride with them and help to catch the wild ponies to be sold at the market. Before that can happen he is told he will have to help build the corrals to house the horses in. The day of the roundup, and on the Island, Paul finds himself under the charge of Wyle Maddox, the leader of the round up. The men at the round up poke fun at Paul and upset him when he is sent off for a straggler horse. He believes they want to just be rid of him. To his luck the straggler horse ends up being Phantom with her foal. He names the foal "Misty" since he mistakenly thinks she is mist when he first sees her.

Phantom runs straight for the others at Tom’s Point where all the man are in disbelief that a youngster has brought in the horse that has eluded them so many times in the past. On the way back to the mainland the foal almost drowns since she is so young. It is common practice to make the horses swim back to the main island. Paul jumps in to save the foal and swims the rest of the way with the foal to keep her alive. On shore Phantom comes to protect her foal from the stampede of other horses that are running up the beach. Paul is told to go home and dry off and rest up for the next day. Maureen, his sister, promises to watch after the horses to make sure Misty and Phantom are okay.

On the way, Phantom makes a break for it but doesn’t get far because her baby can't keep up with her. Maureen figures out that she and Paul could possibly buy both horses if they put a down payment on them and pay the rest off over the year. Maureen heads home to tell Paul. When Maureen arrives Paul is asleep and when he wakes up is excited by the news. Their grandfather says that there will be a storm later that day, based on the fact that his foot is aching badly. Still, he lets them go to the races to watch and to find the fire chief to buy the horses.

While they are at the races the three-time winner, Black Comet, wins just before the massive storm hits. Paul races to make sure the horses Phantom and Misty are safe. Paul can't find them anywhere until he returns to his Grandpa’s truck. Behind the truck is a trailer where Paul, to his surprise, finds the horses. His grandpa had put them in there just before the race apparently. Paul falls asleep in the truck while the storm rages and the temperature drops. The next morning he is wakened by his grandfather who is astounded by what he has found. Misty, the foal, has snuggled up against Paul while Phantom stands guard nearby.

Paul is sent home to get warmed up and to stave off any colds he might have caught from the lowered temperatures. Maureen goes to visit the horses in the corral later and finds that Misty and Phantom have been sold. She cries. Paul and Maureen are devastated by the news but still can't seem to stay away from the corrals. A boy and his father stop them from their car and ask where they can find the fire chief. The children offer to take them to the chief. They discover that this family is the family who've bought Phantom and Misty and won a raffle for another horse. As it turns out, with the free colt from the raffle, they no longer want Phantom or Misty, so Paul and Maureen get their horses after all.

About half a year goes by and at this point the children are at the point where they can ride Phantom. The reader also learns that Misty, the foal, is very personable, often pulling pranks and being mischievous around the farm. The fire chief pays a visit to ask if they want to race Phantom in the upcoming race against Black Comet. Paul accepts the invitation and starts to train. When the race is nearly upon them Maureen and Paul use a wishbone to see who will get to ride Phantom in the race. Paul wins and goes on to ride in the race. The race is close until the end when Phantom opens up and wins without really trying. The Islanders all cheer and with the money Paul and Maureen receive, they buy an electric toaster for their grandparents. However, the win is bittersweet as Paul realizes that Phantom misses running with the wild horses. He begins to feel sorry that he's captured her.

The day after the race, the wild stallion, the Pied Piper, comes to the farm. He was the stallion that Phantom had lived with for many years before living on the farm with Paul and Maureen. Paul sees how Phantom looks at Piper and makes the decision to release Phantom. Paul releases Phantom, but Misty remains with them. Paul's grandfather tells him later that he is proud of him and that it means that he is growing up.