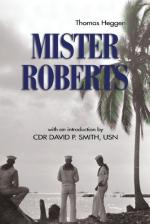 Thomas Heggen
This Study Guide consists of approximately 56 pages of chapter summaries, quotes, character analysis, themes, and more - everything you need to sharpen your knowledge of Mister Roberts.

One of the more enduring plays to emerge from the World War II era, Mister Roberts shows, with a light touch, a side of war that is often forgottennot the excitement or the heroism of battle, but the boredom of the men assigned to less glamorous work, where one's enemies are as often as not the officers who hold power over them, rather than the soldiers or sailors of the opposing forces.

More summaries and resources for teaching or studying Mister Roberts.

Mister Roberts from Gale. ©2005-2006 Thomson Gale, a part of the Thomson Corporation. All rights reserved.