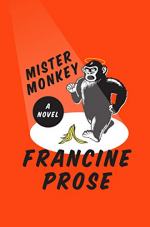 Francine Prose
This Study Guide consists of approximately 43 pages of chapter summaries, quotes, character analysis, themes, and more - everything you need to sharpen your knowledge of Mister Monkey.

Mister Monkey tells the story of a children’s musical theater production in New York called Mister Monkey the Musical and the unexpected and coincidental impact it has on the lives of those directly and tangentially involved in the show.

The Prelude tells the story of Mister Monkey, the children’s novel on which the musical was based. Mister Monkey was adopted by a wealthy New York family after his parents were killed by poachers in Africa. Mister Monkey was wrongfully accused of stealing a wallet at a fancy New York party and his adoptive human father hired a lawyer named Portia McBailey to defend Mister Monkey in court.

In Chapter 1, Margot – an actress in her mid-forties – prepares for the evening’s performance of Mister Monkey the Musical in which she plays Portia McBailey. On stage, Adam, the adolescent actor playing Mister Monkey, rubs his erection against Margot’s hip, making her distracted and uncomfortable and disrupting the rest of the performance. A child in the audience loudly asks his grandpa if he is interested in what is happening on stage. In Chapter 2, Adam is embarrassed by what happened with Margot and hopes she does not hate him. He goes to sleep dreaming about climate change destroying the world.

In Chapter 4, the grandfather whose grandson interrupted the production takes the boy home to his parents. His daughter invites him to stay for dinner with their guests and the grandfather tells one of them that he lost his job because of a painting of a woman holding a monkey. In Chapter 5, the grandson, Edward, begins a new school. His teacher Miss Sonya selects him to give a Show and Tell presentation. Edward tells the class about Mister Monkey the Musical leading to a discussion in the class about Charles Darwin and the theory of evolution.

In Chapter 5, Miss Sonya worries that she may lose her job as a result of speaking about evolution with her class and the principal warns her not to do it again. She goes on a date in a restaurant called Enzo’s. Her date accidentally sends her a text message negatively rating her appearance while Sonya is in the bathroom. In Chapter 6, Ray Ortiz, the author of Mister Monkey the book, takes his girlfriend Lauren to Enzo’s, where they go to spend the royalties from Mister Monkey the Musical. Ray gives his free tickets to the waiter Mario because Ray hates the musical. During dinner they witness an argument between the couple next to them over a text message. Ray tells Lauren a story about his time in Vietnam that he has never told anyone else before. Ray asks Lauren to marry him.

In Chapter 7, Mario the waiter goes to see Mister Monkey the Musical, which he has seen several times because Ray always gives him tickets. He becomes enchanted with Margot and follows her to a restaurant after the show but fails to work up the courage to speak to her. He sits next to another member of the cast, Lakshmi, on the subway, hoping to strike up a conversation that could lead to an introduction to Margot. In Chapter 8, Lakshmi is writing a play loosely based on her own life which also mirrors events from Mister Monkey the Musical. Lakshmi plays a comic police officer in the production and she wears her costume home on the subway because her boyfriend finds it attractive.

In Chapter 9, Eleanor, who plays the woman who wrongly accuses Mister Monkey of theft, decides to intervene to stop Adam’s predatory behavior towards Margot. Eleanor goes to her day job as an ER nurse where she meets the grandfather from Chapter 3 who tells her that the production was bad but that she was very good.

Chapter 10 is told from the perspective of the Hindu Monkey God, known in the novel as Mister Monkey. Mister Monkey, the Monkey God, dreams of the future and sees happiness and personal development for all of the characters, but he does not see the future for Roger, Margot, or Mario.

In Chapter 11, Roger, the director of Mister Monkey the Musical tells the cast that the production run will end in two weeks. He reflects that he has done all that he could to do a good job but that the production has been cursed. After the show, he goes outside where he sees Mario and Margot speaking to each other. Margot tells Roger that Mario is the one who left her the fan letter, which Roger knows is not true because it was Roger who wrote the fan letter. Roger concludes that if this production of Mister Monkey the Musical leads to Margot and Mario finding love together then it will all have been worthwhile.

More summaries and resources for teaching or studying Mister Monkey.