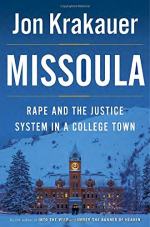 Jon Krakauer
This Study Guide consists of approximately 41 pages of chapter summaries, quotes, character analysis, themes, and more - everything you need to sharpen your knowledge of Missoula.

“Missoula – Rape and the Justice System in a College Town” by Jon Krakauer is a chronicle of the period in the city of Missoula when a number of University of Montana female students reported to the police that they had been raped by males students, the majority of whom were members of the beloved Grizzlies Football Team. While it is well known that rape victims are often reluctant to report the crimes to the police because of the ordeal they face in the investigation and prosecution of the crime, there was another level of intimidation for the females students at UM.

On more than one occasion, after reporting members of the UM football team to the police for sex crimes, it was the girl, the victim of the crime, who was excoriated on social media for having the temerity to report one of the local heroes to the police. The girls were accused of lying because the players didn’t like them or vindictive if the boys had stopped dating them. The Griz fans were so enamored with their football heroes that they refused to believe anything ill of them even despite evidence that was brought forward. The coaches and athletic director were also protective of the boys at the expense of the girls who claimed to be victims of the spoiled, sick young men.

Beyond the specific problems experienced at UM, rape in general is a crime that is treated differently than any other crime. Police are often skeptical of the girl’s story – which isn’t the case when someone reports a robbery or burglary. Police are often gun shy about pursuing a rape case because prosecutors determine that most rape cases are not winnable and refuse to file charges. And in the rare cases when a rape case gets to trial, the female victim is often portray as a bitter and vindictive liar. The cases presented in this book focus on acquaintance rape which represents 80% of all rape cases. Acquaintance rape cases are the most difficult to prove in court.

Several sexual assaults are the focus on the book. Allison Huguet accused Griz football player Beau Donaldson of raping her. They had both been born and raised in Missoula and had been childhood friends. There had never been any romantic or sexual relationship between them. People often remarked how they were like brother and sister. It was a betrayal on more than one level when Donaldson raped her after she fell asleep at a party. Beau Donaldson eventually confessed to the crime and did time.

Cecilia Washburn had dated Jordan Johnson, who was the ultimate Griz player, the star quarterback of raping her. She had dated him a few times but they each had gone their own ways. They were reunited when they ran into each other at a festival and made plans to watch a movie together at Cecilia’s house the next day. There was no romantic interest on Cecilia’s part or on Johnson’s part. However, Johnson did have other things on his mind and he forced himself on her against her protestations. Johnson denied the charges and was acquitted in criminal court.

There were also the cases of Kelsey Belnap who claimed that six Griz players gang-raped her. No charges were brought because it was six to one against her version of the story – the four football players denied it and two eye witnesses disputed her claim. Kerry Barrett also claims that she was assaulted by a UM athlete although he was found to be not guilty at a school hearing. Kaitlynn Kelly claimed she was not only sexually assaulted but was bloodied and brutalized by a male MU student. There was too much evidence to ignore the assault. The young man was expelled and banned from the campus.

The bright light at the end of the tunnel for these dark times at MU and at other universities across the nation is the improved methodology in handling sexual assault cases and the development of effective training for police officers and prosecutors that have been instituted by the federal government. It has made a difference, although there is still much work to be done.

More summaries and resources for teaching or studying Missoula.