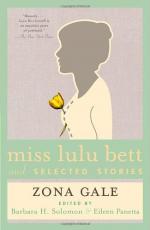 Zona Gale's Miss Lulu Bett was produced in 1920, less than a year after publication of its genesis, the best selling novella of the same name. New York producer Brock Pemberton telegraphed Gale that she should adapt her novella for the theater, and she immediately set to work. "I'm almost ashamed to say how quickly it was done," she told a friend, as Harold P. Simonson noted in his study Zona Gale. "I finished it in a week, but as I wasn't satisfied with the last act I held it over from Saturday to Monday to revise it." That new ending would prove to be the play's greatest source of controversy.

The novella's original ending—which saw Lulu wedded to a neighbor after her first "marriage" was voided by her "husband's" prior marriage—was changed so that Lulu went off in the world on her own, telling her family, "I thought I wanted someone of my own—but maybe it was just myself I wanted." Gale asserted she had changed the novella's ending because it would stretch the audience's credulity to have one woman marry two men in the course of two hours. However, the second ending caused an uproar among theater-goers, who craved a happy resolution. Obligingly, Gale wrote a new ending in which Lulu's first marriage turns out to be legitimate and she and her husband are happily reunited. The audience, if not the critics, were thus satisfied, and Miss Lulu Bett went on to enjoy a successful run and immense popularity. For this play, Gale became the first woman to win the Pulitzer Prize for drama.

Despite the controversy over the ending, Miss Lulu Bett shows a woman who makes the choice to assert her identity and independence. As such, the play conveyed Gale's feminist politics, which she made an important part of her fictional work. The play also is significant in Gale's body of work, marking her transition from sentimental works of fiction to more realistic, sharp-edged works of fiction. Miss Lulu Bett can be found in Plays by American Women, 1900-1930 (1990), edited by Judith Barlow.