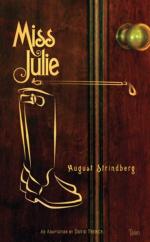 This book is a good basic introduction to the depiction of female characters in drama from the Greeks to the present Hawkins, Mike Social Darwinism in European and American Thought- 1860-1945, Nature As Model and Nature As Threat, Cambridge University Press, 1997.

This book provides a basic introduction to the theory and history of social Darwinism, particularly as it was perceived during Strindberg's time.

Dividing his work into periods, this book integrates a study of Strindberg's development as a dramatist, including biographical information and criticism of his plays