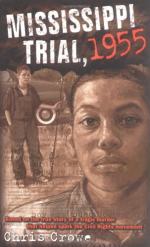 Chris Crowe
This Study Guide consists of approximately 95 pages of chapter summaries, quotes, character analysis, themes, and more - everything you need to sharpen your knowledge of Mississippi Trial, 1955.

Murder Trial, 1955 is the story of a white teenage male named Hiram Hillburn who has returned to his hometown of Greenwood, Mississippi in the summer of 1955. Hiram finds that although the town has not changed in appearance, not everything is as it seems. As a youth, he was unaware of the rampant prejudice that the town has, especially towards blacks. The meeting of Emmett Till helped Hiram to see this and even Hiram begins to have a change of heart. Emmett's kidnapping and murder for alleged inappropriate actions towards a white woman have a deep effect on Hiram, and Hiram feels that it is now his duty to seek the truth of what really happened to Emmett. This tale takes him into the courtroom of the suspected killers and brings him face-to-face with his own feelings and an awful revelation that changes the way he thinks about those he loves the most.

As a 7-year-old boy in 1948, Hiram Hillburn lives in Greenwood, Mississippi with his grandparents as his parents live and work in Oxford. Although Hiram and his grandfather share a harmonious relationship, there is a considerable conflict between Grampa Hillburn and Hiram’s father, Harlan. Grampa’s views are of the stereotypical, racist South, which is first demonstrated to Hiram after an African American worker is berated simply for taking a small break and showing Hiram one of his tools.

Hiram, Grampa, and Grandma Hillburn enjoy a nice quiet life that is filled with the same routines. The mornings are spent following Grampa to the courthouse so that Grampa can “talk business” with friends, afternoons in the family fields talking to the overseer, then evenings filled with a good dinner. Sometimes in the evenings, Hiram goes outside to relax or to interact with R.C. Wiley, a poor boy who is often loud and mean. One night, R.C. is spying on Hiram’s neighbors, the Remingtons, two mentally deficient brothers. Later, R.C. and Hiram go fishing at Hiram’s favorite fishing spot. While there, R.C. tortures and kills a catfish, just because it stung him, causing Hiram to start being very wary of R.C.’s dangerous outbursts.

After Grandma Hillburn’s death, Harlan accepts a job offer in Arizona, making Grampa furious that Harlan is taking Hiram away. Over the years, Grampa has asked for Hiram to spend the summer with him, only for Harlan to forbid it, causing years’ worth of tension between Hiram and Harlan. After Grampa has a stroke in 1955, Hiram is finally allowed to return to Greenwood. At the station he is met by Grampa’s housekeeper, Ruthanne and her cousin, Emmett “Bobo” Till. At first, Emmett is reluctant to do as Ruthanne asks when she tells him to carry Hiram’s bags, but he does only long enough to trick Hiram into carrying his own bags. The next time Hiram sees Emmett is at a fishing hole one afternoon when Hiram is out by himself. He hears yelling in the river and comes across Emmett who has fallen in the river after trying to get a snapping turtle. After Hiram saves Emmett from drowning, the pair talk and find that they have more in common than Hiram originally thought, leading him to wonder why such a thing as racism exists.

Hiram spends much of his time reconnecting with Grampa but with others in the community as well. He in particular wants to see Naomi Rydell again, but instead runs into R.C. first. R.C’s manners have not changed and he is quick to continue his “playful” bullying of Hiram. R.C. wants to reconnect with Hiram by going fishing like they did when they were younger and Hiram reluctantly agrees. After being at the fishing hole for a while, R.C. falls asleep and Hiram sits by himself. He hears others playing in the river and comes across Emmett playing with his cousins. After a bit of conversation, Hiram accidentally mentions his large lunch, which Emmett asks if he could have some of. Hiram says yes, but when he goes to get the bag, Emmett follows him. R.C. wakes up just as Emmett grabs the lunch, enraging R.C. R.C. proceeds to assault Emmett then torture him by shoving a dead fish in his mouth. Hiram, sickened by this scene, goes home feeling ashamed that he did not stop R.C.

Later that evening, Hiram finally sees Naomi at her spot along the Fulton Street Bridge. She is happy to see him and they begin talking as they used to and he tells Naomi about R.C.’s actions. A few nights later, R.C. comes to Hiram saying that the sheriff had been around to ask about an incident along the river. He wants Hiram to say that nothing went on out of the ordinary that day, but Hiram insists that he will tell the truth. R.C. laughs at him and says that it does not matter. He also informs Hiram that he is going with some other white men to the nearby village to talk to a young African American man that has insulted a white woman. Hirma is scared about this and calls the police after R.C. leaves. The police refuse to do anything about the situation and says that the young African American male is from Chicago and needs a lesson in manners, causing Hiram to know that the male is Emmett.

Unable to do anything, Hiram waits for any sort of news about the situation. Shortly after that evening, Emmett is reported missing, making Hiram’s worries worse. A few days later, his body is found in the river, badly mangled and with a cotton gin pulley around his neck. Two men are arrested for kidnapping and are also charged with Emmett’s murder. Hiram is called to be a witness based on what he told the police about R.C. going with the men. Grampa is adamant that he wants Hiram to stay out of this drama, but Hiram insists that it is his duty to bring Emmett’s killers to justice. This causes slight problems between the two as they both believe they are right.

During the trial, Grampa becomes more agitated at Hiram for his desire to do what he feels is right. The trial goes on with the defense constantly discrediting the witnesses. Hiram is never called to be a witness, but he stays for the entire trial. After the two men are acquitted of murder, Grampa is relieved and happy that Hiram will get to go back to Arizona. This is suspicious behavior to Hiram and Hiram’s suspicions worsen when he sees Grampa selling his blue truck to some unknown men. After Hiram asks about it, Grampa gets mad at Hiram telling him to mind his own business. On the way to get fishing gear in the shed, Hiram runs into one of the Remington brothers. After a circular conversation, Hiram finds out that the other brother spotted Grampa with the accused murderers on the night Emmett went missing. Once Hiram goes back in the house, he confronts Grampa with this information, which Grampa admits but is unapologetic for being a part of Emmett’s kidnapping.

Thoroughly disgusted with Grampa’s actions and attitude, Hiram goes out that night to see Naomi. He runs into R.C. instead, who has been missing since the night he told Hiram about going with Emmett’s killers. He admits that he had thought about going, but decided that he wanted a better life and left for Jackson, where he has been living and working ever since. He only comes home on occasion and on this particular evening, he and his father have gotten into an extremely violent fight. R.C. says that he is only in town to inform the sheriff what he has done and is going back to Jackson. The next day, Hiram goes looking for Naomi, but cannot find her as she has been taken somewhere else to live. Tensions between Grampa and Hiram are at an all time high and Hiram prepares to leave for Arizona. Before he leaves, he looks for some sort of apology from Grampa, but Grampa still feels that he has been correct in his behavior, causing permanent damage to their relationship. Hiram sees Naomi at the train station before he leaves. She tells him not to worry about her and that since she no longer lives with her abusive father, she will get the life she has always wanted.

Once Hiram arrives back in Arizona, his father meets him at the railway station. On the way home, father and son finally get to talk about how they feel. Hiram begins to understand his father for the first time in his life and they are able to start repairing their own relationship.

More summaries and resources for teaching or studying Mississippi Trial, 1955.