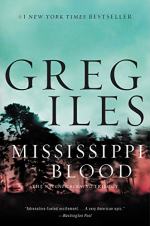 The following version of the novel was used to create this study guide: Iles, William. Mississippi Blood. William Morrow, 2017. Kindle.

In Mississippi Blood by Greg Iles, the end comes for a vicious racist organization called the Double Eagles that has ruled the small Mississippi town of Natchez for decades. This book is the final installment in the Mississippi Burning series, a trio of novels that tells the story of Double Eagles’ fall from power. Penn Cage, son of doctor Tom Cage, narrates as his father is on trial for the murder of Viola Turner, a murder Penn does not believe his elderly father committed. Despite the danger to himself and his family, Penn fights against Snake and his organization with the hope that Viola’s real killers will be brought to justice.

In the days leading up to the beginning of his father’s trial, Penn grieves the death of his fiancee, Caitlin, who was killed while researching the history of the Double Eagles. Penn credits the Double Eagles with her death but also blames his father for getting her involved in researching the dangerous group. He also tries to come to terms with the fact that his father had an affair with Viola, his black nurse, in 1968. Penn has a half-brother, Lincoln, as a result of that relationship. Lincoln, even though he was estranged from his mother in the months leading up to her death, is the one who has asked for murder charges to be brought against Tom. According to Tom, Viola had asked him to give her a lethal dose of morphine when she felt that she had reached the point she no longer wanted to live because of the cancer she suffered.

Investigation of the crime scene, however, showed that Viola had not died from an injection of morphine but instead an injection of adrenaline, a drug Tom testified he did not give Viola. There are rumors that deputies intentionally lost hair and fiber evidence from Viola’s house. An audio cassette, that Lincoln later tries to blackmail Penn into buying is missing from Viola’s room. Two videocassettes, one believed to contain copy made by Viola describing her affair with Tom, and a second believed to perhaps have footage of the murder have been found but are both erased. The district attorney reasons that Tom killed Viola to keep her from telling the community that their respected doctor had a relationship with a black woman and had an illegitimate child because of that affair. Neither the sheriff, who is working in conjunction with the Double Eagles, or the district attorney consider that there might be any suspects in Viola’s murder besides Tom.

Through the course of the trial Tom and his lawyer, Quentin Avery, do not let Penn know their intended strategy for the trial. Tom will not tell Penn what happened the night of Viola’s death and Penn suspects he is hiding something from him. He wonders if his father thinks he is protecting his family from the Double Eagles by taking the blame for a murder they committed. Near the end of the trial, Penn learns that his father is being secretive about the night of Viola’s death because Penn’s mother paid Viola a visit as well. Tom arranged for a video that was recording at the time Peggy was there to be erased in the hospital’s MRI machine because is showed Peggy injecting Viola with morphine. Tom had not given Viola enough morphine to kill her and Viola asked Peggy to finish the job. Even though it was not Peggy’s injection that killed Viola, Tom did not want his wife charged with murder.

At the end of the trial, just as the jury is about to begin deliberating the case Tom demands to be allowed to change his plea. He is sentenced to spend three years in jail as a result of his decision. Penn can only figure that his father feels guilty for the way that Viola and Lincoln had to live while in Chicago and is going to jail as some sort of penance. On the night of Tom’s guilty plea, Penn has gotten half drunk at the idea of his father going to prison. Lincoln, also half drunk, pays him a visit and tells him they have to kill Snake. Penn is surprised when Lincoln tells him he is afraid of what will happen to Tom in jail if Snake remains alive. In an act of retribution, the half-brothers work together to rid the world of the man who caused so much trouble for their families.