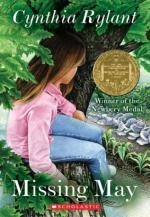 Cynthia Rylant
This Study Guide consists of approximately 27 pages of chapter summaries, quotes, character analysis, themes, and more - everything you need to sharpen your knowledge of Missing May.

Missing May Summary & Study Guide includes comprehensive information and analysis to help you understand the book. This study guide contains the following sections:

This detailed literature summary also contains Topics for Discussion and a Free Quiz on Missing May by Cynthia Rylant.

"Missing May" is the story of a twelve-year-old girl, Summer, and her Uncle Ob struggling to come to terms with their grief after Aunt May dies unexpectedly.

At the opening of the novel, Aunt May has just passed away. Ob is having a very difficult time accepting the news and spends his first night alone in his old Chevy pick-up. Meanwhile, twelve-year-old Summer takes on the caretaker role, ensuring that Ob is dealing with his emotions, that the house is clean, and that they both have enough to eat. Summer wasn't always in this role, however. For the first six years of her life, she was passed from family member to family member after her mother died. Summer never felt loved in any of these houses, and never felt valuable. That is, until she finally came to stay with May and Ob, and was overwhelmed with the love they showed her. From that moment on, Summer knew she was home.

After May's death, a neighbor boy, Cletus, begins showing up at the trailer in Deep Water. At first, he comes hoping to steal some old newspapers from Ob's truck, but when he hears that May has died, he begins coming by more frequently to share his stories with Ob. This new relationship makes Summer very uncomfortable as she fears that Cletus is growing too close to Ob, and that he may steal him away from her. She goes out of her way to be rude to Cletus and make him feel unwelcome, but Cletus keeps coming back, and keeps comforting Ob. Then one day, Ob feels May's presence in the garden where she died, and everything changes. He is sure May needs to communicate something with him, and he will stop at nothing to reconnect with her.

One day Cletus shares a news story with Ob about a pastor in nearby Putnam County that has the ability to commune with the dead. Without thinking much about it, Ob is determined to make his way to Putnam County to meet with this Reverend: Miriam B. Youngs, to see if she can communicate May's message to him. Summer is weary about the idea, but after Ob suffers an emotional breakdown and admits that he doesn't want to go on living anymore, she is grateful that he finally has something to get him out of bed in the morning, something to focus his energy on, so she agrees.

When the group arrives in Putnam County, however, they receive the terrible news that the Reverend has passed on. Ob is crushed. There is no one to translate May's message to him and he feels crushingly lonely. He puts Summer and Cletus back in the car to drive home, and almost passes up the day trip to Charleston he promised them. At the last moment, Ob turns the car around and drives back to Charleston. In this moment, it becomes clear that Ob is going to tackle his loneliness and go on living for his love of Summer and his friendship with Cletus. At the end of the novel, Ob, Cletus, and Summer set up all Ob's whirligigs in May's garden and set them, and their emotions, free.

More summaries and resources for teaching or studying Missing May.

Missing May from BookRags. (c)2022 BookRags, Inc. All rights reserved.