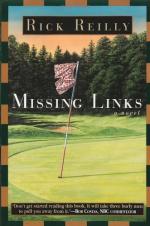 This detailed literature summary also contains Topics for Discussion and a Free Quiz on Missing Links by Rick Reilly.

Missing Links is comedic novel about a group of golfers in Boston who frequent what might be the worst golf course in the country. Ray, a thirty-year-old member of this roguish band of golfers, tells the story. Through the course of the novel, Ray must come to terms with his shortcomings and face adulthood.

Ray's friends are colorful, and almost none of them go by their actual names. Instead, they go by the nicknames they earn at Ponkaquogue Municipal Golf Links and Deli, or Ponky to those who frequent the course. These friends are known as Chops, a slang term for bad golfer. The Chops are proud of their golf course being the worst in America, and they delight in the fact that much of it is built on top of a garbage landfill. The friends enjoy making up their own games that have little resemblance to traditional golf. One day, when a hole is knocked in a hedge at Ponky, the Chops get a view of everything their golf course is not.

Next to Ponky is one of America's most exclusive golf courses, The Mayflower Club. The Mayflower is exclusive in both who can join and how few people can afford the exorbitant membership fees. Soon the Chops, inspired by the eccentric character Two Down, make a bet to see who can play at the posh club first. The wager changes the happy atmosphere at Ponky and takes on a life of its own. It becomes known as "The Bet."

Like most things in his life, Ray is only half serious about winning The Bet. Ray had been a professional golfer until he gave up on that career. Ray had aspirations of becoming a writer until he gave up on that too. His resolve to win The Bet changes when he sees a particular member of The Mayflower Club, his father, who he has not spoken to in years. Seeing his father makes Ray contemplate things in his past that he has not addressed. Ray now has a dual quest: to put to rest some painful memories and to win The Bet.

The Chops will stop at nothing to win The Bet and to have a good time. When it comes to finding ways to have good times or finding unconventional ways to get out of impossible situations, the Chops are never at a loss. The Chops are picaresque group, and their talents and occupations are varied, including one felon and one MIT scientist. The situation surrounding The Bet and its aftermath puts this group up against a group of wealthy and conservative people more interested in decorum than fun. The mix is predictably volatile.

Not every moment is all fun and games. Ray has to face past memories, painful career failures, lost love, lingering resentments, and a variety of other demons he has spent most of his life hiding from. Along the journey, Ray learns something about true friendship and personal accountability. While Ray learns, the reader gets to go along for the hysterically funny ride.