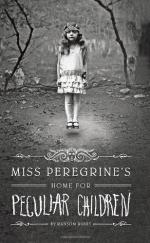 Ransom Riggs
This Study Guide consists of approximately 57 pages of chapter summaries, quotes, character analysis, themes, and more - everything you need to sharpen your knowledge of Miss Peregrine's Home for Peculiar Children.

This detailed literature summary also contains Topics for Discussion and a Free Quiz on Miss Peregrine's Home for Peculiar Children by Ransom Riggs.

This fantasy novel is the story of Jacob, a moody teenager who discovers, over the course of a series of increasingly dangerous adventures, that his grandfather's stories of monsters and children with strange powers are actually true. As it flips back and forth between past and present, and as Jacob learns old truths about his grandfather and new truths about himself, the narrative pays thematic attention to the question of what constitutes individual identity, and also explores the differences between appearance and reality.

First person narrator Jacob Portman begins his story by describing his relationship with his grandfather - specifically, how Grandpa Portman (Abe) told exciting stories about his childhood that, as Jacob grew older, he became convinced were fairy tales. When his grandfather is savagely murdered, and when Jacob sees a strange and terrifying face watching him from the woods near where Abe's body is found, he starts to think he's losing his mind. As his concerned parents try to help Jacob put what he saw, and the nightmares the image triggers, into the past, Jacob discovers evidence that his grandfather's stories might have been true. He convinces his parents to let him travel and explore the possibility, but his father insists on accompanying him. Together Jacob and his dad travel to an isolated island in Wales, in search of the truth behind Abe's stories about Miss Peregrine and her Home for Peculiar Children.

Jacob is dismayed to discover that the Home was destroyed in a bomb attack early in World War II. One day, however, as he's exploring the ruins, he encounters a girl whom he recognizes from one of the photos Abe showed him from his childhood. He follows her, but she (Emma) turns the tables on him and captures him, taking him through a mysterious tunnel into the past. There, the Home is not yet bombed and there, Emma and several other children with special abilities make their home under the strict protection of Miss Peregrine, a middle aged woman who can turn back and forth into a bird and who keeps them safe in a time loop that repeats the same, safe, perfect day over and over. Elated to discover that his grandfather was telling the truth, concerned about the secrets that Miss Peregrine and Emma appear to be keeping, and worried about what his father would say if he learned the truth, Jacob returns to the village where he and his dad are staying. He tells his father that he's made new friends on the other side of the island, but neglects to tell him they're hidden in the past.

Over the next few days, Jacob goes back and forth between the past and the present, finding the past more attractive (Emma in particular) and the present more frightening, particularly when first a flock of sheep and then a friendly villager are slaughtered. When he passes this news on to Miss Peregrine, Jacob is shocked to learn that the killings are probably the result of attacks by wights, monsters in human form in search of food for their masters, a group of even nastier monsters called the hollowgast who feed on peculiar children like those under her care ... and like Jacob. He, Miss Peregrine says, has the same special ability as his grandfather - the ability to see the hollowgast.

Jacob, Emma and some of the other students break Miss Peregrine's rules and go into the village in search of the truth behind the killings. They discover that they were, in fact, the result of attacks by a wight who, in turn, attempts to have them killed by a hollowgast. Jacob and the others escape, evading the hollowgast's pursuit. Jacob faces it alone and kills it, but a short time later discovers, along with the others in his group, that Miss Peregrine has been kidnapped by the wight. Jacob and Emma lead a rescue effort, killing the wight and rescuing Miss Peregrine. Meanwhile, something has gone wrong with Miss Peregrine's time loop, and time in the past is moving forward at its regular rate. Jacob decides to stay in the past with Emma and his new friends, searching out both new loops in which to hide and doing what they can to help others like them fight off wights and hollowgasts.