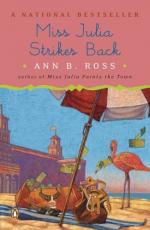 Ann B. Ross
This Study Guide consists of approximately 41 pages of chapter summaries, quotes, character analysis, themes, and more - everything you need to sharpen your knowledge of Miss Julia Strikes Back.

This detailed literature summary also contains Topics for Discussion and a Free Quiz on Miss Julia Strikes Back by Ann B. Ross.

Miss Julia, a middle-aged woman of some wealth, discovers her engagement ring and the bulk of her friend's jewelry has been stolen from her home. After contacting authorities, learning of a possible ring of jewelry thieves in the region and deciding the police move too slowly, Miss Julia packs up her friend's son, Lloyd, and sets off to find her belongings.

Their sleuthing takes them to West Palm, Florida, where they attempt to employ the very intoxicated Frank Tuttle, private investigator. After one whole day of sobering Frank, Julia explains her situation, and Frank refuses to help. After generous salary offerings, however, he changes his mind.

Frank's agreement in no way signifies compliance, however. He frequently tries to slip away from Julia and return to the bar. However, he does learn of suspicious activity at one house in a West Palm neighborhood. After one, short night of surveillance, in which everyone, Julia, Lloyd, Julia's acquaintance from North Carolina, Etta Mae Wiggins, and Frank, the investigator decides the house is under federal investigation, Frank refuses to return.

Not to be dissuaded, Julia recruits Etta Mae to pose as door-to-door bible sellers, in order to get a look inside the suspicious house. When a man comes to the door, Etta Mae fakes heat stroke to get the women inside. After a few, tense minutes, Etta Mae "recovers" and the women leave the neighborhood. A stern man in a dark suit, presumably a federal agent, advises them to stay out of the neighborhood. As they drive away, Etta Mae shows Julia a necklace she picked from the man's pocket. Julia recognizes it as a family heirloom of one of her neighborhoods in Abbotsville, North Carolina. The proof stiffens her resolve to get her jewelry back. After a brief consideration, she decides she cannot call the authorities, because they would keep the jewelry as evidence for an unknown period.

Etta Mae and Julia return to the office of Tuttle Investigations, where they find Lloyd alone. Julia decides to drop Frank Tuttle's help and just as she turns to leave, he enters. Etta Mae suggests keeping him around, and they take him back to their hotel to sober him up again.

Over lunch, the women discuss their options. They fear that, given the missing necklace, the thieves will move soon. Etta Mae devises a plan and leaves to buy walkie-talkies. Julia and Lloyd drive to a Target to get more weather appropriate clothes. A woman of high society, Julia refuses, at first, to buy goods of such questionable quality. When she spots the thieves buying luggage, however, she quickly changes, to not be recognized. Lloyd and Julia leave the store just in front of the thieves.

In their new clothes and with their new electronics, the foursome sets out to spy on the house once again. Frank balks at first, but Julia's generosity quickly changes his mind.

At Frank's advice, they park their car at a house obviously hosting a party and pretend to be a family out for a stroll. Julia becomes morally offended when Etta Mae and Frank seem to be carrying their husband and wife charade too far. For her sake, they fall further apart. On the block behind the house in question, Julia and Frank prepare to slip through the hedgerows while Etta Mae and Lloyd make their way back to the car, in case a quick getaway is needed.

After several mishaps, Julia and Frank find themselves behind the thieves' house. They quickly realize the thieves are preparing to make a getaway. Frank approaches the cars and then hastily leaves, telling Julia the stakeout is over. Julia approaches for a closer look and sets off a car alarm. They frantically call to Etta Mae on the walkie-talkie as they scramble through the bushes to the street behind.

Once they all pile into Julia's car, they watch as federal agents peel out after the thieves first SUV. Frank admonishes them to stay and follow the second SUV, correctly assuming the first one is a decoy. Frank also shares he put a piece of tape over the taillights of the SUVs, so they can identify it when the truck passes them.

The authorities stop the first SUV on bridge leading out of the community and this quickly causes a traffic jam. As it backs up down the block, they spot the SUV in question. They break into the line of traffic and pursue the truck onto the northbound interstate.

After hundreds of miles, they follow the SUV into a rest area. After everyone takes time to freshen up, Frank goes into a fast food restaurant for some provisions. While he is gone and only one man remains with the SUV, Julia decides to try for a closer look. She instructs Etta Mae to create a diversion for the only man left looking after the SUV. This Etta Mae does effectively, so Julia gets access to the SUV. She crawls to the cargo area in the back and begins feelings through several duffel bags and suitcases. The first several bags are filled with cash. Not even tempted, Julia passes over the money in search of her jewels. Just as she locates a bag of jewelry, she hears the warning signal from Lloyd that the thieves are returning.

To create a diversion, she opens the door and throws the cash into the parking lot. This quickly creates a mob, with people greedily grabbing for loose bills. Julia dashes back to her car with the bag of stolen jewelry. There, she finds Etta Mae is still missing. She leaves the jewelry with Lloyd and returns for her friend.

About that time, Frank emerges as well. He tries to convince Julia to stay with the car while he goes for Etta Mae. She, as usual, does as she pleases. She finds Etta Mae hiding under a parked car and joins her as the crowd begins to get out of control. People attack the SUV with crowbars and grab for more bags of money.

Julia and Etta Mae sneak back to the car and they drive away just as the SUV pulls out of the rest area. Not far down the interstate, the police pull over the SUV with its remaining money. Julia hires Frank to drive them back to North Carolina and the group drives a little farther before stopping at a hotel for the night.

With Frank driving, they make it home to Abbotsville much quicker. Julia admonishes Frank to begin attending church, to change his destructive lifestyle. She promises to pay him for his church attendance for one year. That weekend, he attends church in Abbotsville. Julia watches with excitement as he talks with the pastor after the service. She becomes frustrated, however, when he becomes quick to point out others' shortcomings.

When Julia's friend and housemate, Lloyd's mother, returns, they inspect the contents of the bag. They recover Julia's Princess Diana replica engagement ring and many of Hazel Marie's pieces. Then, they turn the remaining jewelry over to local authorities.

More summaries and resources for teaching or studying Miss Julia Strikes Back.