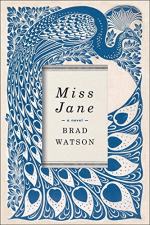 Plot Summary
+Chapters Summary and Analysis
Introduction - Purgatories
Weanings
Light of the Gathering Day
Grace in the Wilderness - Sensual Matters
Mortality
Death Insurance
The Infernal Voices of Reason - Essentially Normal
Do You Like What You See, Who You Are?
Some Other Ghost
The Boy With the Camera
After Her Kind - Suitors
On Love - Oblivion
Copper Pennies - Worm
Otherworldly Birds - Epilogue
Free Quiz
Characters
Symbols and Symbolism
Settings
Themes and Motifs
Styles
Quotes
Order our Miss Jane Study Guide

Watson, Brad
This Study Guide consists of approximately 52 pages of chapter summaries, quotes, character analysis, themes, and more - everything you need to sharpen your knowledge of Miss Jane.

The following version of this book was used to create the guide: Watson, Brad. Miss Jane. W. W. Norton & Company, 2016.

In 1915 in rural Mississippi, Jane Chisolm is born to a set of parents -- Ida and Sylvester -- who are cynical and pessimistic about the prospect of having another child. The town doctor, Dr. Eldred Thompson, who travels to the Chisolm farm for the birth, immediately notices that there is something has gone awry with baby Jane's genitals, and the doctor confides in Sylvester that Jane is most likely a girl, although he is not 100% sure at that point. As Jane's early childhood years progress, it becomes clear that, while she is a girl, those same birth deformities have made her incontinent, a condition she will carry for life. Even though Sylvester and Ida grow distant to the point of hating each other, and even though Jane's older sister, Grace, is also a gruff personality, young Jane still brings out the best facets of all their personalities.

Even though Jane's parents and Dr. Thompson had always assumed that Jane could not go to school, as a result of her incontinence, Jane insists on going anyway, even though she knows she will be teased. After a year of school, during which Jane mostly abstained from eating or drinking until after the school day, to avoid any accidents, she stops going to school. Still, Jane teaches herself to read, with books that Grace brings home, and also teaches herself math by watching her father make change at his small general store. Also, the frequent supportive appointments with Dr. Thompson help to cement an uncommonly warm and reciprocal relationship between the doctor and Jane.

When Grace is in high school, she secretively brings Jane to the woods and commands Jane to watch while Grace has sex with a boy Jane does not recognize. While talking with Grace afterwards, Jane is intensely confused and embarrassed by the incident, a reaction that Grace expects. As Jane grows into adolescence, she begins to be attracted to the local boys, and begins attending local community dances, where she is an immediate catch thanks to her sudden self-confidence and also her air of mystery. At this time Jane begins a flirtatious relationship with her neighbor, Elijah Key. Although the relationship is warm and mutually respectful, Ida and Sylvester decide that Jane will move into town -- several miles away -- to live with Grace, preemptively breaking up Jane and Elijah before the prospect of Jane's inability to have sex arises.

After many years of working with Grace on a dry cleaning business that ultimately fails, Jane is briefly adrift in life -- unemployed while Grace begins a scandalous new job as the business manager of a local brothel. One day Sylvester comes into town and has grave, serious conversations with both Grace and Jane before dying in his sleep that night. This causes Jane to move back onto the family farm with Ida, who quickly becomes senile and passes away herself. For many years after that, Jane's lone remaining friend is Dr. Thompson, and she settles into a long life of solitude on the farm.

More summaries and resources for teaching or studying Miss Jane.