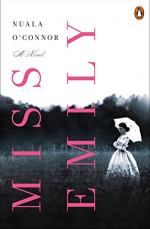 The following version of this book was used to create this study guide: O’Connor, Nuala. Miss Emily: A Novel. New York: Penguin, 2015.

Nuala O’Connor’s historical novel opens in 1866 in Amherst, Massachusetts. There, 36-year-old Emily Dickinson lives as a spinster with her mother, father, and younger sister in the bright yellow family Homestead on Main Street. The Dickinsons are in need of a new maid, and Emily, who desires more time to focus on her poetry, wishes to eschew extra housework. She has grown shy over the years and prefers to stay home, only occasionally visiting her dearest friend Susan. Susan is married to Emily's brother, Austin, and therefore lives just across the garden in the Evergreens villa. Their relationship is deep, complex, and at times erotic, and Emily shares her heart, poetry, and even stolen kisses with her sister-in-law.

Meanwhile, a young, spirited Irishwoman named Ada Concannon is unsatisfied working as a domestic servant in a baronet’s house in Dublin, Ireland. In search of more in life, Ada bids her family farewell and secures passage to America. When she docks in Boston, she settles in with her kind relatives, Uncle Michael and Aunt Mary, in their house on Main Street in Amherst.

When Mr. Dickinson hears there is a recent immigrant nearby in need of a new post, he hires Ada to work as the family’s maid. While Mrs. Dickinson is a stern and melancholy mistress, and Miss Lavinia (Vinnie) Dickinson is often engaged with society outdoors, Miss Emily takes an instant liking to their new maid and considers the kitchen, Ada’s new domain, her new refuge. Despite Victorian conventions of class and propriety, Ada instantly assumes a familiar manner with Emily, who is delighted with her ease, poetic youth and foreignness, and vibrant zest for life. Over the next year, Ada and Emily develop a deep and unlikely friendship, crossing boundaries of age, class, faith, and nationality, in a time when all of these factors were likely to create divisions rather than harmony.

Emily and Ada can often be found in the kitchen chatting and baking, with Emily taking on the role of pupil and Ada mentor. Emily shares her poetry and recites the works of other important masters and Ada playfully mocks her mistress’s lofty ideas—she herself being devoted instead to a handbook on housewifery and frugality that she keeps on her bedside table. Yet she respects Emily’s intelligence, literary skill, and reclusive lifestyle, while others criticize her isolated and eccentric ways. While Emily grows more secluded, refusing to even leave her room most days and decides to wear only white from then on in order to purify her mind and open it to inspiration, Ada begins a courtship with a young Irishman named Daniel Byrne, who works as a casual laborer for the Dickinson family and begins to visit her in the kitchen. They enjoy pleasant outings, such as country rides and a day at the circus, reminisce about their home country, and even attend mass together that is held in a local household, due to the absence of a Catholic church in Amherst.

Eventually, a crude young drunkard named Patrick Crohan begins to harass Ada, shouting slurs at her and visiting her without her consent. His violence towards her escalates and one night, Ada is awoken when he sneaks into her bedroom and brutally sexually assaults her. Devastated and wounded in body and spirit, Ada keeps this traumatic experience to herself, wanting to shelter Emily’s innocence, save Daniel from the pain, and avoid scandal that would risk her being cast out of the respectable Dickinson household. Emily, only aware that Patrick slapped Ada, informs her brother, and Austin condemns what he views as her loose morals and deceitfulness, qualities he associates with the Irish. When he notices rashes spreading on Ada’s wrists, he sends her to Boston to see a doctor, who prescribes her a medication for gonorrhea. Warned not to spread her disease to others, and bowed with shame, Ada lies to Daniel, saying her uncle has forbidden her from seeing him anymore.

When Emily discovers the full truth, she is devastated for her friend, ashamed by her family’s cold and haughty reactions, and bravely defies them when they deem it necessary to send her away. She also believes Daniel deserves to know the truth and informs him, against Ada’s wishes. But when the shock of what happened to Ada spurs him to set off immediately to seek revenge on Patrick, Ada and Emily act quickly to prevent further disaster. Filled with courage inspired by her loyalty and friendship to Ada, Emily at last leaves her sanctuary, and they rush after him. But they are too late, and they find Daniel lunging into Patrick with a knife, bringing him to his death. Terrified, they drag Daniel away, and when Austin discovers them guiltily huddled on the road, they are forced to confide in him. Despite his prejudices, Austin comes through and helps them leave town under the cover of nightfall, and the stunned young couple board a ship back to Ireland, where they will be free to put this series of devastating events behind them, marry, and start a family.