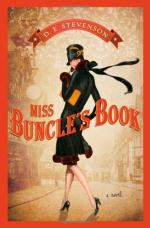 D.E. Stevenson
This Study Guide consists of approximately 57 pages of chapter summaries, quotes, character analysis, themes, and more - everything you need to sharpen your knowledge of Miss Buncle's Book.

In "Miss Buncle's Book" by D. E. Stevenson a woman, Barbara Buncle, takes up writing with the hope that it will bring in an income. Her novel, written under the pseudonym "John Smith," is a thinly veiled, satirical depiction of her hometown, Silverstream. The novel, "Disturber of the Peace," becomes a bestseller once the villagers in Silverstream realize that the villagers in the fictional Copperfield are modeled after themselves, and are not always a flattering portrait. "Miss Buncle's Book" has a wide range of characters and jumps around from character to character throughout the course of the novel, which is told in linear form.

The novel opens with a dreamlike description of the village of Silverstream. Then the novel turns to the London publisher Arthur Abbott, who has received a copy of "Disturber" and does not know what to make of it. He invites John Smith in for a meeting and is shocked to see that it is a woman, Barbara Buncle. He decides to publish the novel.

Meanwhile, in Silverstream, Vivian Greensleeves, a vain and arrogant widow, has just had a letter telling her that the new vicar, Ernest Hathaway, is rich. She decides to pursue him and make him her husband so she can be wealthy again like she was when her husband was alive. Ernest, for his part, is extremely conflicted about his wealth and decides to live on a church salary alone, signing his wealth off to his uncle for a year. Throughout the novel Ernest will experience much hardship and desperation under his self-imposed poverty. Vivian knows nothing of his loss of income, though everyone else in town does.

Sarah Walker, wife to Dr. John Walker, is first to read the novel and recognizes that Silverstream is Copperfield. She thinks the novel is brilliant but wonders what will happen next, fearful of the reactions of those in the novel. Eventually the other villagers read it, and some, in particular Agatha Featherstone Hogg, are outraged. They go see Mr. Abbott to try to stop him from publishing it but he tells them he cannot do that.

Barbara enjoys her newfound wealth and slowly becomes accustomed to it. She meets Sally Carter, Mrs. Carter's granddaughter, one afternoon and strikes up a friendship. Colonel Weatherhead and his neighbor, Dorothea Bold, become engaged and marry in France to avoid gossip.

Mrs. Featherstone Hogg hosts a drawing room meeting for the villagers to discuss "Disturber" after her husband and their lawyer says she cannot press charges for libel. At the meeting Vivian Greensleeves accuses Sarah Walker of being John Smith, which she initially denies and leaves the meeting. Vivian and Mrs. Featherstone Hogg conspire to kidnap Sarah Walker's children, and do so in January. Sarah gets them back after signing a form saying she is John Smith.

Sally begins lessons with Ernest because he needs the money and because even though she is 17 her grandmother treats her like she is 7 and says she needs an education. In the course of their lessons, Sally and Ernest fall in love, and Sally lets it slip to Vivian that Ernest is poor. Vivian breaks it off and Sally and Ernest are engaged by the end of the novel.

Barbara and Arthur fall in love and get married. By the end of the novel, Barbara has become more confident and more stylish and has truly transformed into a writer by profession. Upon publication of the sequel to her novel she moves in with Arthur in town. The townspeople figure out that she is John Smith, but when they go to confront her they see that she has gone.