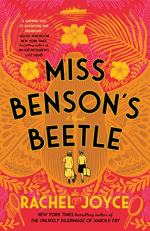 Rachel Joyce
This Study Guide consists of approximately 45 pages of chapter summaries, quotes, character analysis, themes, and more - everything you need to sharpen your knowledge of Miss Benson's Beetle.

The following version of this book was used to create the guide: Joyce, Rachel. Miss Benson’s Beetle. Bond Street Books, 2020.

Joyce’s novel is divided into 54 chapters. The majority of the novel is told through Margery’s point of view, with the exception of the chapters focusing on Mrs Pope or Mr Mundic. The first third of the novel focuses on Margery and Enid’s journey to New Caledonia. The second third centers around their expedition on the mountain. The final third focuses on Enid’s pregnancy and the two women hiding from the police. The narrator is third person limited, focusing mostly on Margery’s thoughts and feelings.

Joyce begins the novel with a flashback to Margery’s childhood. One day, her father shows her a book of magical creatures. He shows her the golden beetle of New Caledonia. Margery’s father then finds out that all of his sons have been killed in the war. He shoots himself.

In the present moment of the novel, Margery is a lonely spinster. She teaches at an elementary school but hates her job. One day, the kids pass around a note making fun of her. Margery quits and steals the school deputy’s pair of boots. She is determined to pursue her lifelong dream of finding the golden beetle.

Margery puts an ad in the newspaper for an assistant. She interviews a war veteran, Mr Mundic, who is clearly unhinged. Mr Mundic becomes Margery’s stalker. She finally decides on an assistant, but then they quit at the last minute. Margery’s last resort is Enid Pretty. Margery dislikes her at once.

Enid and Margery take a cruise on their way to New Caledonia. On the cruise, Enid has a miscarriage. Margery has a fear of blood and faints in the hallway. Mr Mundic, who followed them onto the cruise, brings her to the infirmary.

The cruise docks in Brisbane, Australia. Enid is taken to a migrant camp because she does not have a passport. Margery has to fly to New Caledonia, alone. At the last minute, Enid shows up on the airport and they leave together. Margery is genuinely glad.

Back in England, the police investigate the murder of a man named Percival Collett. The main suspect is his wife, Nancy, who fits Enid’s description exactly. Enid even has a suitcase with the initials N.C.

Once the two women arrive in New Caledonia, Margery is hesitant to start the expedition. They attend a garden party at the British consulate where Margery is laughed at by the ladies. One woman, Dolly Wiggs, is kind to her and gives Margery her address. Enid steals a jeep and some equipment to help with the expedition. Margery finds out and is furious. They have their first argument, but it leaves their friendship stronger.

Enid and Margery drive up north to the bungalow which will be their home during their stay. They start their expedition on the mountain. Their goal is to gradually cut a path to the top, where golden beetles can supposedly be found amongst some orchids. The expedition takes weeks. The two women bond over time. Enid confesses that her husband was gay. Margery tells her she was in love with an older man, Professor Smith, who broke her heart. Enid tells Margery that she is still pregnant. Margery tries to get her to rest but Enid refuses to stop looking for the beetle. They finally reach the top of the mountain, but no beetles are to be found.

In the meantime, Mundic stalks the women. He is determined to get rid of Enid so that he may lead the expedition. Mrs Pope, the wife of the British consulate, is suspicious of the women. She suspects they are responsible for the theft of the jeep and the scientific equipment.

One night, Enid confesses to Margery that she is really Nancy Collett. She murdered her husband out of pity. Percival lost a leg in the war and was never the same. He tried to kill himself but failed. He begs Enid to help him and she strangles him with a pillow. Margery sticks by Enid regardless. She helps Enid deliver a baby girl who Enid names Gloria Benson. Enid gets sick and Margery is forced to bring her to Dolly Wiggs’ house for protection. Mrs Pope finds out that Dolly is harboring the fugitives and calls the police. The women are forced to retreat back to their bungalow.

Back up north, Enid and Margery make plans to escape the country. On a whim, Margery leaves the bungalow and starts climbing the mountain. She finds the golden beetles at last, but decides to leave them for someone else to discover. When she gets back to the bungalow, she finds Mundic there. He threatens Margery and the three end up in a physical fight. Enid falls to the ground and dies. Mundic falls through the floor.

Years later, Margery sends a letter to the only woman working the entomology department of the National History Museum: Freya Bartlett. She sends a photo of her and Enid, along with a photo of the golden beetle. Freya is inspired to travel to New Caledonia herself, to try and bring back the beetle.