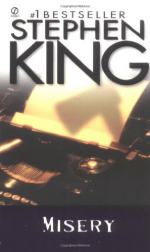 Stephen King
This Study Guide consists of approximately 36 pages of chapter summaries, quotes, character analysis, themes, and more - everything you need to sharpen your knowledge of Misery.

This detailed literature summary also contains Topics for Discussion and a Free Quiz on Misery by Stephen King.

"Misery" by Stephen King is a work of fiction.

Paul Sheldon wakes up in extreme pain. The pain ebbs and flows but is constant underneath. Paul is drugged. There are memories of childhood days at Revere Beach. Paul wakes to someone giving him mouth to mouth. As Paul becomes conscious, he is aware of a horrendous smell.

Later, Paul wakes up in a bedroom. A woman is sitting next to the bed, reading. Paul learns that he is in a farmhouse in Sidewinder, Colorado. "My name is Annie Wilkes. And I am -" "I know," he said. "You're my number-one fan" (Part 1, chapter 2, page 6).

Annie Wilkes lives in a farmhouse in Sidewinder, Colorado. The location is rural and for most of the story it is winter with few references to the outside of the house. Paul immediately sees Annie for what she really is - a dirty, disheveled middle aged farmer.

Annie carries Paul back to her house, tends to his extensive injuries, and in effect, holds him hostage. Annie, a former nurse, has all of the tools necessary to care for a severely wounded patient like Paul. The result is that Paul does heal to a degree but also becomes hooked on Novril, a codeine-like drug.

The phrase, "I'm your number-one fan" will be used often throughout the book, as if to justify the things Annie does to Paul.

The majority of the story takes place inside the house. Paul's bedroom is where the writer spends almost all of his time. The room is sparsely furnished with a bed, nightstand and a desk. There is a mantel on the wall and one window which Paul uses to look out into the farm yard.

Paul has no idea what the house looks like from the outside. How far is the farmhouse from the town? Paul decides it may be 15 miles or 45 miles, there is no way to tell. The farm is a working farm and is home to two cows, six chickens, and a pig named Misery.

It is clear from the beginning that Annie is mentally unstable. Annie is completely obsessed with Misery Chastain, a fictional character. Annie's obsession eventually translates to Paul, Misery's creator. As the story goes on, it is clear that Annie suffers from extreme psychosis, volleying back and forth between depression, catatonia, and violent rage.

Annie is capable of almost anything, as she proves to Paul through her acts of cruelty. Annie's cruelty does not stop there however, as she openly participates in self-flagellation.

Annie Wilkes, like many of Paul Sheldon's fans, is completely obsessed with Misery Chastain, a fictional character. Misery offers Annie an escape into the 19th century, which was a softer gentler time when people did not behave like they do now. In "Misery's Child" Paul kills off Misery, which is responsible for Annie's insane behavior and idea to force Paul to bring Misery back to life. Paul hates the Misery books and wants to move on to more serious and creditable books.

There are many passages throughout the book that come from "Misery's Return." At first, Paul tries to write just enough to appease Annie. Annie's rage at every one of Paul's indiscretions ends in some act of extreme cruelty, from a thumbectomy to hobbling, which is the act of cutting off a foot. As a result, Paul nearly dies more than once.

Throughout the story Paul learns a great deal about himself and his work as a writer. "Misery's Return" ends up being the best thing Paul has ever written.

After many months being held captive, Paul is able to trick Annie and gets away. Annie's skull is fractured due to their conflict, and she dies alone in her barn.

Paul sells Misery for many millions of dollars after he returns home to New York. Although the book is a success, Paul Sheldon will be reminded about the horrors at Annie's house every day for the rest of his life.

More summaries and resources for teaching or studying Misery.