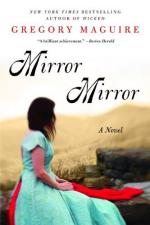 Gregory Maguire
This Study Guide consists of approximately 34 pages of chapter summaries, quotes, character analysis, themes, and more - everything you need to sharpen your knowledge of Mirror Mirror.

Constantinople is a city located in Turkey. Its modern-day name is Istanbul.

Babylon is an ancient city/state located in what is now Iraq. Babylon is situated just south of Baghdad.

The Adriatic Sea is a body of water that is part of the Mediterranean Sea.

Crete is the largest of the islands comprising the country of Greece.

Aragon is a city located in northeastern Spain.

Saint Peter's Basilica is a church located in Vatican City, Italy. Saint Peter was one of the original twelve apostles, early followers of Jesus.

Rome is the capital city of Italy.

The Tyrrhenian Sea is located off the western coast of Italy.

Ferro battuto refers to a type of ornamental ironwork.

Ravenna is an Italian city located in the Emilia-Romana region of Italy.

More summaries and resources for teaching or studying Mirror Mirror.