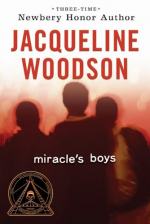 Woodson, Jacqueline
This Study Guide consists of approximately 36 pages of chapter summaries, quotes, character analysis, themes, and more - everything you need to sharpen your knowledge of Miracle's Boys.

Lafayette Bailey is 12 years old during the novel's main story line. He lives with his two older brothers, Ty'ree and Charlie, after both parents die. His father died before Lafayette was born. He had jumped in a frozen lake to rescue a woman and her dog, and he died of hypothermia later. Lafayette's mother died from complications of diabetes. Lafayette was alone in the house with her when he found her comatose one morning. Lafayette's oldest brother, Ty'ree, is the official guardian of his two younger brothers, Lafayette and Charlie. The three boys are each struggling with guilt and grief, and each is trying to find his way through those feelings to happiness.

Ty'ree is a brilliant young man who had earned his way through an elite high school and had been granted admission into MIT before his mother's death. He gave up his dream of going to college to take responsibility for the family. While Ty'ree is smart and caring, he is still a young man overloaded with responsibility. He struggles to make ends meet financially, but he also struggles to balance his needs with those of his brothers. He wants to keep the family together at all costs, and he cannot understand why the middle brother, Charlie, seems intent on tearing them apart.

Charlie was in a juvenile detention center when the brothers' mother died. He had robbed a local store and police caught him with a gun and the cash still in his pocket. Charlie blames Lafayette for their mother's death and insists he would have taken steps to save their mother. Lafayette knows he is not responsible, but Charlie's words hurt. As the three brothers begin to open up to each other, Lafayette discovers that Charlie is carrying a load of guilt of his own. The last time his mother saw him, Charlie was in handcuffs. He knows he will never have the chance to change that last meeting, and he strikes out at Lafayette as a means of coping with his own grief.

When Lafayette gets himself in a serious situation that results in a gang fight and being arrested in a stolen car, the three brothers know they are in danger of being separated. The state is holding Ty'ree accountable for his brothers' actions. If Charlie is returned to jail, Ty'ree will lose custody of both of his brothers. Lafayette does not want to return to jail and realizes that he has to make changes in his life. The changes begin with some honest conversations with his brothers.

As the novel comes to a close, the three renew their bond and their commitment to each other. They begin to talk more about the happy memories of their parents.

More summaries and resources for teaching or studying Miracle's Boys.