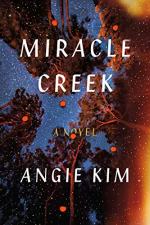 Angie Kim
This Study Guide consists of approximately 52 pages of chapter summaries, quotes, character analysis, themes, and more - everything you need to sharpen your knowledge of Miracle Creek.

The following version of this book was used to create the guide: Kim, Angie. Miracle Creek. Sarah Crichton Books, 2019.

Miracle Creek describes the events surrounding a fateful explosion and subsequent fire at a hyperbaric oxygenation chamber intended to treat people with medical issues. The first section of the work captures the events surrounding the explosion. The work is then divided into the four days of the trial of Elizabeth Ward, followed by a short Afterward. The Yoos have immigrated from Korea in hopes of building a better future for their daughter, Mary. Pak Yoo oversees the Miracle Submarine, a hyperbaric oxygenation therapy (HBOT) chamber. The work begins when Pak asks his wife, Young, to oversee the controls of the Miracle Submarine. Young agrees to, but leaves the barn in which the chamber resides to get batteries. The following people are in the chamber at the time of the explosion: Dr. Matt Thompson, Kitt Kozlowski and her son TJ, Henry Ward, Teresa Santiago and her daughter Rosa for a DVD player. TJ and Henry are both being treated for autism, Rosa for cerebral palsy, and Matt for fertility issues. Elizabeth Ward has notably absented herself from treatment, also called "dives." At the time of the explosion, she is down by Miracle Creek, listening to music, and drinking wine. The moments prior to the dive were frenetic, as a group of protesters descended upon the facility. The protesters feel HBOT is dangerous, and verbally attack the participants declaring the children with autism are not lab rats. Upon returning to the Miracle Sub, Young sees Mary blown into the air as a result of the explosion.

A year later the trial begins, and Elizabeth Ward is charged with starting the fire under the oxygen tanks. Kitt Kozlowski and Henry Ward have died in the explosion, and Matt Thompson's hands are severely burned in his attempt to save Henry. Pak Yoo went in the barn to try and save his clients, and is in a wheelchair as a result. Mary Yoo was in a coma, and appears to be suffering from the trauma. Elizabeth is suspected as she is overzealous in her treatment of Henry, subjecting him to various medical treatments as well as extensive therapies in an effort to cure Henry. Unbeknownst to anyone, Elizabeth does not attend the dive that night because she has a realization of how demanding she has been and hopes to simplify both her and Henry's life. Elizabeth believes the protestors set the fire to teach her a lesson. The work is told through alternate retrospective narratives, and through this narration each of the characters reveals some sort of deception.

Pak and Young Yoo are struggling to acclimate to America. Pak feels marginalized and Young feels outcast by both her husband and her daughter. In turn, Mary feels abandoned by her mother, who works excessively when they arrive to America without Pak. It is Pak and Mary who perpetuate lies to cover up what happened the night of the explosion. Yet Young slowly pieces together the sequence of events, and exposes the truth. Due to her loneliness, Mary begins to meet Matt Thompson by Miracle Creek to smoke and confide in one another. Matt's relationship with his wife Janine is disintegrating, due to her relentless pursuit of having a baby. However, Matt takes advantage of Mary on her seventeenth birthday, sexually assaulting her. Janine finds a note in Matt's belongings, and confronts Mary the night of the explosion without telling Matt.

In tandem with these events, Elizabeth is embroiled in her own internal conflict over her treatment of Henry. The prosecution paints her as an abusive, manipulative parent, and she begins to believe the narrative. Teresa, Kitt, and Elizabeth all struggle to raise children with disabilities, sometimes in the face of enormous societal pressure and with little support. During the trial, Elizabeth is forced to witness Henry testifying on video in an abuse investigation. He lies about scratches Elizabeth gave him, and this pushes her over the edge. She absconds from the courthouse with her attorney's car and drives off of a cliff, killing herself.

As Young unravels the lies surrounding the explosion, she realizes that Pak had set up the scene for a fire in hopes to frame the protesters and keep them away from Miracle Submarine. In a tragic twist of fate, Mary, reeling from Matt's abuse and Janine's verbal assault, comes upon the pyre and sees it as fortuitous. She does not believe anyone is in the barn, as Janine has told her the dive is over, and she lights the match hoping that if she burns down the barn, they can return to Korea where she was happy. However, the dive was still in play resulting in grave tragedy. Young encourages Mary to tell the truth and the two repair their relationship as a result. In the Afterward, Pak and Mary are both imprisoned, and despite Matt's actions, he remains largely unpunished. Teresa and Young collaborate in creating Henry's House, a facility that will support families with children with disabilities.

More summaries and resources for teaching or studying Miracle Creek.