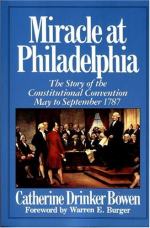 This detailed literature summary also contains Topics for Discussion and a Free Quiz on Miracle at Philadelphia by Catherine Drinker Bowen.

Miracle at Philadelphia is Catherine Drinker Bowen's narrative account of the Constitutional Convention that is held in 1787, during which delegates from 12 of the 13 newly independent American states hammer out what will become the United States Constitution, which is still in effect today. Bowen works from the diaries and notes of delegates, including James Madison, and includes contemporary newspaper accounts to paint a human portrait of the Convention, complete with the tensions and dissensions between states that threaten to tear apart the Convention and perhaps even the young country.

Bowen focuses on a very specific slice of American history in her book, condensing nearly five months of almost continuous meetings into approximately 300 pages. The Constitutional Convention, although it was not called this at the time, takes place during one of the hottest Philadelphia summers that the local residents can remember. Bowen uses the worsening heat to add a sense of weariness or even delirium to the proceedings as the delegates consider and reconsider motion after motion.

Bowen begins by providing a short description of the events leading up to the Convention. In 1787, the states are connected through the Articles of Confederation, which were adopted during the Revolutionary War with England. These articles provide for a Congress with representatives from all the states. The Congress is in session in New York as the Convention opens.

The Articles of Confederation have been found to be ineffective in some areas of government, particularly in trade. Congress calls for a convention of the 13 states to meet and propose modifications to the Articles. What the Convention produces, however, based largely on a proposal brought by the delegation from Virginia, is a completely new constitution that outlines a national government that is apart from and above the individual states.

George Washington sits as President of the Convention, which opens in May 1787. Other well-known names from American history are also present, including Benjamin Franklin, Alexander Hamilton, James Madison and George Mason. Bowen provides brief background information on these and other prominent delegates. However, with 55 delegates attending at different times over the course of the summer, the book sometimes becomes difficult to follow.

Two-thirds of the way through the book, Bowen breaks away from the narrative of the Convention and supplies a description of the United States and its people at the time, as seen through the eyes of foreign visitors. These visitors' astonishment and amusement at the very different Americans accentuates the fact that the experiment in government that is about to be undertaken has never been tried on such a scale before.

Following this description, Bowen returns to the narrative of the Convention and focuses on some of the more contentious issues that threaten to dissolve it, such as the Western Territory, slavery, and how the states should be represented in Congress. These questions continue to be raised among the states as the new Constitution is considered for ratification. Bowen ends her narrative with the ratification of the new Constitution.