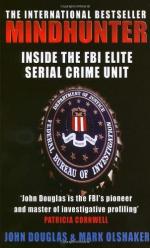 Plot Summary
+Chapters Summary and Analysis
Prologue through Chapter 5
Chapter 6, Taking the Show on the Road
Chapter 7, The Heart of Darkness
Chapter 8 through Chapter 10
Chapter 11, Atlanta
Chapter 12, One of Our Own
Chapter 13, The Most Dangerous Game
Chapter 14 through Chapter 16
Chapter 17, Anyone Can be a Victim
Chapter 18 through Chapter 19
Free Quiz
Characters
Objects/Places
Themes
Style
Quotes
Topics for Discussion
Order our Mindhunter: Inside the FBI's Elite Serial Crime Unit Study Guide

John E. Douglas
This Study Guide consists of approximately 35 pages of chapter summaries, quotes, character analysis, themes, and more - everything you need to sharpen your knowledge of Mindhunter.

Swedish Hospital is the name of the hospital in Seattle, Washington where John Douglas recuperates for a month after suffering a brain hemorrhage from stress, overwork and anxiety.

Quantico, Virginia is the home office location of the FBI on a Marine base. Agents are indoctrinated there in 1970 under J. Edgar Hoover to seek Soviet spies everywhere. FBI agents learn "shoot to kill" and are trained in criminal law, fingerprint analysis, violent and white-collar crime, arrests and other subjects as part of their initial and specialized training programs in Quantico.

Behavioral Science Unit (BSU) is the initial name of the unit Douglas joins and later manages and renames the Investigative Support Unit.

Clovis, New Mexico is the name of the location where Douglas is transferred by the Air Force to run the Special Services athletics programs. While in service...

More summaries and resources for teaching or studying Mindhunter: Inside the FBI's Elite Serial Crime Unit.