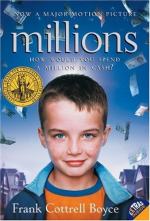 “Millions” is a children’s novel by Frank Cottrell Boyce in which brothers Damian and Anthony Cunningham come into possession nearly two hundred thirty-thousand pounds stirling just before England’s transition to the euro on December 17, 2005.

When the novel begins, Damian, Anthony, and their father have moved into a brand new house in a new neighborhood following the death of their mother. Both brothers handle their mother’s death differently. Damian turns to faith, specifically to an interest in the host of saints that populate Heaven, and Anthony turns inward, pretending to outwardly be dealing with the death of his mother well. Inside, he is heartbroken.

Damian and Anthony begin school at Great Ditton Primary School, where Anthony explains to Damian that mentioning their dead mother will always get them things. It is part of Anthony’s way of coping with things. For example, at lunch, they are able to learn where a new acquaintance lives after mentioning that their mother is dead.

Damian helps to cope with the passing of his mother by building a hermitage out of cardboard boxes near the railroad tracks at the edge of the neighborhood, and seeking to live like a saint whenever he can. He is visited by visions of numerous saints, all of whom he asks if they know a Saint Maureen. None of them do. Damian decides to pray to God, mentioning that his mother is dead. As a train comes past, a bag of money lands at his feet.

Damian shows Anthony the money, which amounts to just under 230,000 pounds. Anthony rationalizes that God wanted them to have the money. With Euro Day fast approaching, Anthony knows they must spend the money quickly. Damian suggests doing things like helping animals and the poor, such as Saint Francis Assisi and Saint Nicholas did, but Anthony would rather purchase material things. They spend money on both. Word at school quickly spreads that Anthony and Damian are rich, and so they are best by friends seeking to sell things.

More attention is brought to the brothers when a mysterious man with a glass eye begins asking about the cash. Damian’s three-thousand dollar donation to a charity visiting school is also called into question by the woman collecting money, Dorothy. Anthony later learns the cash they found is part of a robbery scheme whereby bags of pounds earmarked for incineration were thrown from a train to be collected and exchanged for euros by criminals involved in the scheme.

Dorothy takes an interest in Damian and Anthony’s father as Euro Day approaches. The man with the glass eye also begins to appear more frequently, leading Damian and Anthony to tell their father the truth about the money. Their father decides they will keep the money since it is intended to be destroyed anyway, and because he is tired of having to work so hard and spending so little time with his sons. Dorothy agrees to help them with a plan to exchange as much of the money as possible in the final hours of the pound.

That night, Damian’s house is surrounded by hundreds of people who have heard that the family has so much money, and that Damian and Anthony have been so free with it. Damian is both saddened and frustrated at how much people are obsessed with money –whether they truly need it or not –and so brings the money to the railroad to burn it. The police arrive in response to the masses of people, so the man with the glass eye is powerless to do anything.

After he burns the money, Damian receives a vision of his mother, Maureen. Maureen tells Damian to keep faith, including in other people. She tells Damian to watch out for his brother, and tells Damian that he is her miracle. Back home, Damian relates this to Anthony. He also relates to the police that he has burned all of the money. An announcement is made as such to the people outside, who begin to flood the railroad. The police then leave to keep the people off the tracks. Dorothy herself later leaves. With the money that Dorothy, Anthony, and their father have secretly held onto and later revealed, Damian decides the family should sponsor the digging of wells in northern Nigeria.