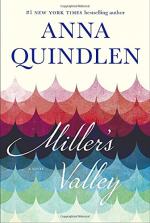 In the historical novel of Miller’s Valley, Mimi MIller, a Miller’s Valley, Pennsylvania native, recalls life in her hometown before the area was submerged by the government in a water reservoir project in the 1960s. Mimi looks back on the events of her late teens and early twenties from four decades on, reflecting on her family life, her love life, and life in general growing up.

The novel then steps back in time. Mimi, part of local royalty as a member of the Valley’s original founding family, the Millers, lives with her mother Miriam, father Bud, and brothers Tommy and Eddie while Aunt Ruth, a spinster and Miriam’s sister, lives in a small house on the property. Mimi deeply loves her family, enjoys spending time with them, and excels at school. Tommy tends to be a troublemaker while Eddie tends to be an intelligent, hard worker at all he does.

Miller’s Valley, first settled in the 1820s, has recently been prone to repeated flooding due to the Roosevelt Dam that has been constructed nearby by the government. Only belatedly does the government realize that the reservoir they have created is not enough to meet water demands, so Miller’s Valley will have to be flooded. The residents of Miller’s Valley must either be bought out or forced out. Despite years of trying, everyone refuses to go.

Meanwhile, Tommy joins the Marines and appears to straighten his life out, while Eddie takes a high-paying construction and engineering job in Philadelphia. When Tommy returns from fighting in Vietnam, he is changed dramatically. He gets into drinking and drugs, and ends up in jail. Eddie comes to oversee a new housing development being built just beyond Miller’s Valley, with the hope that residents of Miller’s Valley will move there after the valley is flooded. Mimi, securing a number of scholarships, is prepared to go to college at State, but decides to begin with community college when her father has a stroke.

Over the next few years, Mimi has a relationship with Tommy’s older friend, Steven, but this does not work out because Steven is unfaithful. When Mimi’s father dies, she is heartbroken. When Tommy does not attend the funeral, she is enraged. Ultimately, Mimi receives scholarships to go to the University of Pennsylvania, where she decides to become a doctor. While studying in Philadelphia, she encounters her childhood friend, Donald, who asks her out. This ultimately leads to marriage. Meanwhile, Mimi returns to the family farm to help her mother put things in order as one-by-one, following the worst flood yet, the residents have finally decided to sell and move out. Mimi is initially stunned by what is happening, but her mother explains the valley is no longer home to her because her family is no longer there.

Years later, and with a family of her own, Mimi comes to agree. She reflects how, during one of the final sweeps of her Aunt Ruth’s house, she discovered the long-dead, hardened corpse of a baby wrapped in silk and hidden away in the attic. Mimi never learns anything more about the baby, but to protect the family from the final rounds of the authorities prior to flooding, she puts the baby down a well. Reflecting on everything decades later, Mimi realizes she does not miss Miller’s Valley because it is a place that no longer exists, so it cannot be missed.