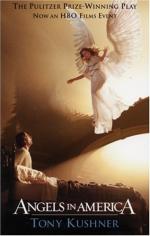 Tony Kushner
This Study Guide consists of approximately 31 pages of chapter summaries, quotes, character analysis, themes, and more - everything you need to sharpen your knowledge of Millennium Approaches.

This detailed literature summary also contains Topics for Discussion and a Free Quiz on Millennium Approaches by Tony Kushner.

Set in the mid-1980s, Millennium Approaches tells the story of two couples during the Reagan era and the outbreak in AIDS awareness. Louis Ironson's lover Prior Walter is dying of AIDS, and Louis can't handle the horrors of the illness. He leaves Prior, who begins having visions of an approaching Angel. Meanwhile, Joe Pitt, a conservative Mormon, is offered a position in the Department of Justice by high-powered attorney Roy Cohn. Joe wants to take the job, but his wife Harper is battling mental problems and addiction to Valium. Joe faces the ethical dilemmas involved in the politics of his new job opportunity, as well as his dawning realization that he's gay.

The story begins at Louis's grandmother's funeral, when Prior tells Louis that he's been diagnosed with AIDS. He's afraid Louis will leave him, and his fears are confirmed as Louis immediately begins wondering whether he can stick by Prior through his illness and likely death. Meanwhile, high-powered, crass lawyer Roy M. Cohn offers conservative Mormon Joe Pitt a dream job at the Department of Justice. Joe's decision is complicated by his wife, Harper. Harper has hallucinations and is addicted to Valium, and she doesn't want to move to Washington. Joe feels obligated to take care of her, but he wants the job he's been offered. He wants to be involved in the Reagans' conservative movement in Washington.

Joe and Louis meet in the men's restroom at the Federal Court of Appeals, where they both work. Louis is a lowly word processor, and Joe, a clerk for one of the judges, finds Louis crying in the restroom. Joe asks him what's the matter, and Louis says he's crying for a sick friend. Louis is disdainful of Joe's conservative politics and picks up on the fact that Joe is gay, something Joe denies. Prior and Harper also meet, in a dream-world where Harper tells Prior that deep inside, a part of him is free of illness, and where Prior tells Harper that her husband is gay.

Harper confronts her husband about being gay, but he still denies it. Meanwhile, Louis is on the verge of leaving Prior, as Prior becomes more and more ill. Roy Cohn is also diagnosed with AIDS, but he refuses to admit, even to his doctor, that he could be gay. Roy believes his power changes who he is and instructs his doctor to call his illness cancer.

Joe learns that Roy wants him in the Justice Department so that Joe can use his power to help Roy, but still Joe can't give Roy an answer about the job. After Prior winds up in the hospital, Louis leaves him, and Prior begins hearing a Voice and seeing his ancestors' spirits, heralding the coming of an Angel. Joe finally admits to Harper that he's gay, and Harper disappears into a dream world. Joe also rejects Roy's job at the Justice Department, leaving Roy sick and dying alone with his own ghosts. As Joe and Louis come together, each needing to be with someone, Prior's Angel arrives, saying that they have work to do in the world.

More summaries and resources for teaching or studying Millennium Approaches.