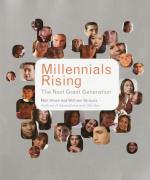 Strauss and Howe
This Study Guide consists of approximately 28 pages of chapter summaries, quotes, character analysis, themes, and more - everything you need to sharpen your knowledge of Millennials Rising.

This detailed literature summary also contains Topics for Discussion on Millennials Rising: The Next Great Generation /by Neil Howe and Bill Strauss ; Cartoons by R.J. Matson by Strauss and Howe.

This book describes the Millenial Generation, which consists of the people born between the years 1982 and 2002. Howe and Strauss argue that contrary to conventional wisdom, Millenials are well-behaved and optimistic and have the potential to be one of America's greatest generations.

Most commentators believe Millenials are continuing and deepening the trend towards cynicism seen in Generation X, but by almost any measure Millenials are doing better than Generation X-ers at a similar age and still improving. Howe and Strauss contend that this improvement is due to increased care given to babies and children in the early-1980s by Baby Boomer parents. The increased attention has made Millenials more special, sheltered, confident, team-oriented, high achieving, pressured, and conventional than either Generation X or Baby Boomers. These attributes make Millenials capable of replacing the G.I. Generation that fought in World War II and is rapidly dying off. Millenials will do this by solving the main problem of Generation X through increased civic action and correct the excesses of Baby Boomers with a greater emphasis on action over talk.

The Millenial Generation is the largest in American history, and it is also the healthiest, which reflects the greater concern form Millenial children. While it is conventional wisdom that American culture has become very bad for children, there is actually far more emphasis on protecting children both morally and physically than ever before. While a Millenial family is more likely to have a single parent than a Boomer family was, that trend among many others is now improving. Schools are being swept by a movement towards high standards that encourage high achievement by Millenial students. Millenials are increasingly busy with school and planned extra-curricular activities and have the least time for unstructured play of any generation. As a generation, Millenials face a strict crack down on bad behavior best exemplified by the movement towards strict zero tolerance rules, and Millenials' behavior is much better than that of Generation X-ers. Millenials commonly work together to reach a community goal and area already organizing their own charities. Millenials consume culture that is more optimistic and innocent than the dark, moody culture of Generation X, and Howe and Strauss predict that this trend will only continue. Millenials also have more money to spend than any earlier generation, but less of that money comes from sources independent of their parents. Millenials are a worldwide generation, but the generation started earlier in North America, making North American Millenials leaders for Millenials across the globe.

Howe and Strauss predict that Millenials main contribution will be strengthening the civic institutions of the country as well as the physical infrastructure. Furthermore, the authors argue that Millenials can be a Hero Generation like the G.I.s, but Millenials must first be faced with a crisis and overcome it. However, if Millenials fail to overcome the next crisis, their great energy could turn negative and lead to a dictatorship or another detrimental outcome.

More summaries and resources for teaching or studying Millennials Rising: The Next Great Generation /by Neil Howe and Bill Strauss ; Cartoons by R.J. Matson.