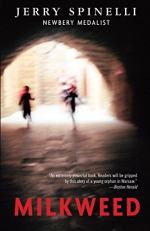 Jerry Spinelli
This Study Guide consists of approximately 37 pages of chapter summaries, quotes, character analysis, themes, and more - everything you need to sharpen your knowledge of Milkweed.

This detailed literature summary also contains Quotes and a Free Quiz on Milkweed: A Novel by Jerry Spinelli.

The following version of this book was used to create the guide: Spinelli, Jerry. Milkweed. Random House, 2003.

Jerry Spinelli's novel Milkweed follows the remembered childhood narrative of eight-year-old Misha. As an older man, Misha reflects on his experiences living amidst the conflicts of World War II in Warsaw, Poland. At the start of the narrative, Misha arrives in Warsaw, orphaned and alone. After he meets an older boy, Uri, while stealing bread, the two establish a friendship. Because Misha reminds Uri of his deceased younger brother, he takes the young boy under his wing, giving him a place to live in the cellar of a barbershop. Throughout the early chapters of the novel, Uri watches out for Misha, teaching him the rules of their increasingly dangerous world. Through his companionship with Uri, Misha learns about friendship, Nazi rule, and the Jewish faith.

One day while running through the streets in search of food, Misha finds himself in a garden behind a house. On the step of the house a little girl, Janina Milgrom, watches him. The two become fast friends. Because Janina and her family are Jewish, they go into hiding not long after she and Misha meet. Attached to his new friend, Misha begins stealing food for her family and leaving it on her porch. Janina leaves small gifts in return.

Meanwhile, Nazi dominance in Warsaw becomes increasingly oppressive. Bread, coal, and trees begin disappearing. Uri and Misha live on the run more frequently, no longer safe in their former barbershop home. Misha continues stealing food for his friends, and for the orphans at Dr. Korczak's orphanage as well. In the next months, the Jackboots relocate all of the Jewish families behind the wall of the ghetto. In the ghetto, Misha moves in with Janina's family. Late at night he and Janina sneak through a hole in the wall and steal food for their companions. Misha is grateful to feel a part of the Milgrom family, even adapting their beliefs and last name. He willfully abandons the former history Uri invented for him months prior.

As food becomes scarce and bodies begin to pile in the streets of the ghetto, the characters begin fearing what the Nazis will do to them next. They hear rumors of deportation and resettlement. One night Misha encounters Uri in a hotel from which he is stealing food. Uri tells him to get out of the ghetto as soon as possible. When Misha tells his companions, Mr. Milgrom begs Misha to take Janina with him and to never return.

Because her mother has recently died, Janina is especially reluctant to leave her family and refuses to stay on the opposite side of the wall with Misha. One day however, the two are unable to return, finding all the holes in the ghetto wall filled back in. Seeing the Jackboots evacuate their companions from the ghetto, the two run to the train station. Misha loses sight of Janina in the crowd. When he finally relocates her, he sees a Jackboot lift and throw her through the crowd. The next moment, another Jackboot Misha recognizes as Uri, shoots him in the ear.

He wakes up alone and disoriented in the train station. Desperate to find Janina again, he leaves the station in search of her. A man finds him asleep near the tracks and brings him back to his farm. He and his wife enslave Misha until the end of the war.

The narrative then flashes forward to Misha's life years in the future. He leaves Poland and moves to New York where he eventually meets a woman, Vivian, and marries. Their relationship dissolves quickly. It is not until she leaves that Misha notices she is pregnant. Many years later, while working in the grocery store, his daughter, Katherine, and granddaughter find him. Misha gives his granddaughter Janina's name for her middle name. Katherine welcomes Misha into their home. His new life with his family grant Misha peace and reconciliation with his past.

More summaries and resources for teaching or studying Milkweed: A Novel.