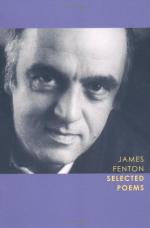 Introduction & Overview of The Milkfish Gatherers

James Fenton
This Study Guide consists of approximately 34 pages of chapter summaries, quotes, character analysis, themes, and more - everything you need to sharpen your knowledge of The Milkfish Gatherers.

"The Milkfish Gatherers" appears in Fenton's 1994 collection Out of Danger. The poem is an example of New Formalism or poetry that has returned to the roots of more traditional English verse forms. Fenton, a British poet, takes W. H. Auden as a mentor for form but moves his own verse further into the realm of the social and political world. "The Milkfish Gatherers" is a more recent work, coming late in the poet's career. The poem makes use of Fenton's geographical wanderings and comments on the political and social history of the Philippines. On a metaphorical level, the poem is also a commentary on the state of contemporary poetry.

"The Milkfish Gatherers" tells the story of fishermen in Manila during the Philippines' century-long fight for political independence, which began when the country was ruled by Spain in the 1800s and continues to this day. The poem is about the revolutionary idea: how it is born, how it dwindles, and the hope of its return. At hopeful points, the poem anticipates a new future but settles at the end into the waiting time before the dormant revolution awakens. In the latter part of the poem, the Filipino story becomes a human story. The revolution becomes humanity's struggle to retain things of value, maintain dignity, and cultivate dreams of the future. The poem is also an example of an ars poetica, or a poem about the writing of poetry. In this way, the poem can be read as an extended metaphor. The fishermen are like poets, casting their lines, poetic lines, in an attempt to write something of value. The revolution, then, is one of language. The speaker muses about the current world of the contemporary poet; how the fish or the poems are milkfish or, in other words, nothing much.

Fenton's travels and experiences outside of his life as a poet give him a broad terrain in which to roam. This poem is representative of many of his works that take possession of alien subject matter—other cultures and the lives of people that encompass those cultures—and allow the alienation to be absorbed and formed into a more universal story.

More summaries and resources for teaching or studying The Milkfish Gatherers.

The Milkfish Gatherers from Gale. ©2005-2006 Thomson Gale, a part of the Thomson Corporation. All rights reserved.