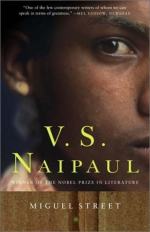 V. S. Naipaul
This Study Guide consists of approximately 22 pages of chapter summaries, quotes, character analysis, themes, and more - everything you need to sharpen your knowledge of Miguel Street.

This detailed literature summary also contains Topics for Discussion and a Free Quiz on Miguel Street by V. S. Naipaul.

V. S. Naipaul is an Indian writer from Trinidad who has written many novels that are set in the developing world. He is focused on writing about the history of areas and peoples that are usually forgotten. Naipaul also won the Nobel Prize for literature and a number of other honors. Miguel Street is his semi-autobiographical work which occurs during World War II in Port of Spain, Tobago and Trinidad. The book is set in a particular time but is not confined to strict chronological order. Instead, the book is divided into seventeen chapters which are a series of episodes in Naipaul's life, though Naipaul himself remains unnamed throughout the entire work. Miguel Street is the location of all the main characters of each episode, a street in the western part of Port of Spain. Naipaul writes from the first-person and describes his own experiences within each episode save towards the end of the book.

Miguel Street is the story of shattered hopes and dreams. Every major character in the book either fails to achieve their life's dream or succeeds only to the mildest degree. Many go insane. The book is full of tragedy though it is typically understated. The book supplements a focus on tragedy with highly comedic elements. These are not "laugh out loud" sorts of moments but instead light-hearted portraits of a particular time and place. The only person who really escapes Miguel Street is the author himself, who is a boy and teenager during most of the book and who leaves for London on a scholarship to study pharmacology.

The characters featured in each episode are very colorful. The first character is Bogart who starts off appearing to be the most boring person the author has ever met. As time goes on, it is revealed that Bogart randomly leaves Miguel Street to work odd jobs associated with great adventure. Mr. Popo is a tragic craftsman and carpenter who fails to create anything of value despite his best efforts. B. Wordsworth is a poet who has taken the name of William Wordsworth. His goal is to write the greatest poem in history but he never writes a line before he dies. The most insane character is Man-Man who became increasingly religious until he declared himself the Messiah and demanded that people hang him on a cross and stone him. When they actually started stoning him, he dropped the act and demanded that they let him down.

Miguel Street also contains a gang of young adults of which the author is a member. It also includes his good friend Hat and his brother Edward who both have their own shattered dreams. Each tries to pursue a more exciting and American form of life and both fail. These tragedies strike the author the hardest.

More summaries and resources for teaching or studying Miguel Street.