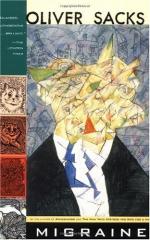 This detailed literature summary also contains Topics for Discussion and a Free Quiz on Migraine by Oliver Sacks.

The author, Oliver Sacks, is a clinician and physician who has, over the course of his career, observed many patients with various manifestations of migraines. One of the most important aspects of the migraine, according to Sacks, is that the symptoms are so varied that there is a great potential for misdiagnosis.

Sacks identifies "common" and "classic" migraines. While the word "migraine" has become synonymous with "headache," Sacks points out that some patients have no headache at all. Others may have a headache but may lose sight of that pain in the midst of other symptoms. Among the most common symptoms is a tendency toward nausea. This is sometimes the course for relief and Sacks cites one patient who finds relief only after vomiting, so that the man seeks t his relief as soon as possible after the onset of the migraine.

Hallucinations are another part of the more common series of symptoms. Sacks notes that there is a derogatory connotation with the word "hallucination," but that it simply refers to something that seems very real to the sufferer but that isn't there in reality. These sensory hallucinations often take the form of lights that range from "stars" or general flashes of light to complex geometric patterns or even shapes of people or things. These sensory overloads may also refer to smells or sound. In the case of the former, it may be that a patient believes he or she smells some particular odor or that the odor is suddenly overwhelming or obnoxious. The same may be true of sounds.

There are several theories as to the causes of migraines. It seems generally accepted that migraines have a correlation to constricted arteries but Sacks notes this is not a new concept and refers to the "blood letting" of ancient times. Sacks examines the physiological impact of migraines along with potential medial causes.

While there are no miracle cures for migraines, there are sometimes situations that prompt them. These can sometimes be discovered by careful journal entries, such as the case of the woman who had an undiagnosed sugar level issue. Skipping a meal invariably prompted a migraine because of hypoglycemia. Sacks notes that it would be absolutely cruel to deny medication to a patient in the throes of pain but says that he never tells a patient to rely on medicine as the cure-all for recurring migraines. He identifies two potential treatment options with regard to medications: one that treats the mechanics and a second that treats the symptoms. One of the best treatments, according to Sacks, is an increase in caffeine taken in a dim, quiet, soothing setting.