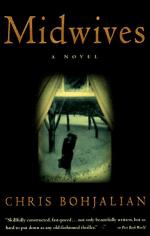 Related Topics
The Flight Attendant
Hour of the Witch

Chris Bohjalian
This Study Guide consists of approximately 35 pages of chapter summaries, quotes, character analysis, themes, and more - everything you need to sharpen your knowledge of Midwives.

This detailed literature summary also contains Topics for Discussion and a Free Quiz on Midwives by Chris Bohjalian.

Midwives is the third novel from acclaimed author, Chris Bohjalian. The novel tells the story of Sibyl Danforth, a midwife put on trial for the death of one of her clients. A trial that is supposed to be about the death of a single woman turns into a battle between science and nature as the right of a woman to choose home birth is debated. Sibyl's young daughter, fourteen-year-old Connie, watches from the sidelines, powerless to control the chaos that threatens to tear her family apart. Midwives is a novel of family, of trust, and of loyalty that will keep the reader guessing until the very last page.

Charlotte Fugett Bedford is a quiet woman who recently moved to Vermont from Arkansas. Charlotte has few friends and is often lost in the shadow of her minister husband, Asa. When Charlotte becomes pregnant with her second child, she chooses to visit a midwife rather than an ob-gyn. Charlotte's pregnancy is uneventful, except for a brief struggle with anemia, convincing Sibyl Danforth, her midwife, that she is a good candidate for a home birth. When Charlotte goes into labor, it seems the birth will be as uneventful as the pregnancy. However, things begin to change as the labor progresses late into the night.

When Sibyl notes some excessive bleeding, she suggests Charlotte be moved to a hospital. Unfortunately, an ice storm has knocked out the phones. Sibyl decides to go get her car and move Charlotte that way, but the driveway is so slick Sibyl ends up driving her car into a snow bank. It seems there is no hope of moving Charlotte. Gratefully, the bleeding stops and Charlotte appears to be out of danger.

Sibyl encourages Charlotte to push. Over four hours, the baby moves down the birth canal but stubbornly refuses to emerge into the world. Sibyl continues to encourage Charlotte, convinced the baby only needs one more good push. Charlotte has grown tired and is struggling to find the energy to keep up with Sibyl's demands. Suddenly Charlotte has a seizure that Sibyl believes is caused by a stroke. Sibyl performs CPR, but after the final cycle, Sibyl does not feel a pulse or hear a heartbeat. Sibyl does, however, detect a fetal heartbeat. Sibyl elects to do a cesarean section and deliver the baby from his deceased mother.

Charlotte's body is taken to the medical examiner's office for what Sibyl is told is a routine autopsy. Unknown to Sibyl, her assistant begins to question Sibyl's actions by calling Sibyl's backup physician, Asa, and finally the police. That night, Sibyl is visited by the police who take a statement. Sibyl quickly hires a lawyer through whom she learns that the state is going to charge her both with practicing medicine without a license and involuntary manslaughter. When the autopsy is released, Sibyl begins to lose some of her confidence in her own innocence. It seems the autopsy found no sign of a stroke, but determined Charlotte died from blood loss directly related to the cesarean section Sibyl performed.

The trial quickly becomes a debate between science and nature, fighting over the safety of home birth. The prosecution claims Sibyl is unqualified to provide medical care for a woman in labor and that her profession misled Charlotte and her husband into a false sense of security. The defense claims that Sibyl has fewer infant and maternal mortalities than a comparable medical practice and that Charlotte is partially to blame for her own death for withholding part of her medical history.

During the trial, it comes out that Sibyl keeps a journal in some notebooks at home that might have her personal impressions about the night Charlotte died. The judge orders the notebooks brought to the court so he can determine if they should be handed over to the prosecutors. Connie, Sibyl's daughter who has read these journals, steals particular passages from the notebooks in order to protect her mother from her own words. A few days later, after the judge has decided the notebooks have no bearing on the case. Sibyl is found not guilty on the manslaughter charge.

Connie grows up to become an ob-gyn, despite the slap in the face this appears to offer her mother's profession. Connie believes it is important to keep the lines of communication open between the medical community and midwives. Connie also feels that someone owes a debt to women for what happened the night Charlotte Bedford died. Connie feels this way because her mother wrote in her journal the night after Charlotte's death that she felt the body flinch. Charlotte was alive when Sibyl cut into her abdomen.

More summaries and resources for teaching or studying Midwives.