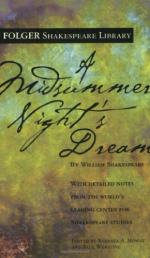 William Shakespeare
This Study Guide consists of approximately 156 pages of chapter summaries, quotes, character analysis, themes, and more - everything you need to sharpen your knowledge of A Midsummer Night's Dream.

Attendants appear in several scenes during the play, and are sometimes mentioned in the stage directions as "others" or as Theseus's train. In lV.i, Theseus addresses attendants directly, instructing them to do various tasks. The attendants have no speaking parts.

Nick Bottom, the weaver, first appears in I.ii, with the other mechanicals, or clowns (Quince, Snug, Flute, Snout, and Starveling), as they are sometimes called. It is often noted that the mechanicals' names reflect their work. "Bottom," critics explain, refers to the bottom, or skein, around which yarn is wound. Bottom directs Quince to tell the group which play they will be performing and to tell everyone which parts they will be playing. Quince assigns the role of Pyramus to Bottom. Bottom seems enthusiastic about playing this part, and he volunteers also to play the role of Thisby, and that of the lion. Quince convinces...

A Midsummer Night's Dream from Gale. ©2005-2006 Thomson Gale, a part of the Thomson Corporation. All rights reserved.