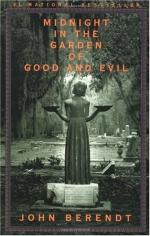 Midnight in the Garden of Good and Evil Quotes

"He was tall, about fifty, with darkly handsome, almost sinister features: a neatly trimmed moustache, hair turning silver at the temples, and eyes so black they were like the tinted windows of a sleek limousine." Chapter 1, p.3

"'But actually," she said, 'the whole of Savannah is an oasis. We are isolated. Gloriously isolated! We're a little enclave on the coast - off by ourselves, surrounded by nothing but marshes and piney woods. We're not easy to get to at all, as you may have noticed. If you fly here, you usually have to change planes at least once...We're a terribly inconvenient destination!" Chapter 2, p. 29

"'We don't do black-on-white in Savannah...especially black male on white female. A lot may have changed here in the past twenty years, but not that."' Chapter 4, p. 55

"'I've often thought of changing my life completely, but it never works. I moved...

Midnight in the Garden of Good and Evil from BookRags. (c)2023 BookRags, Inc. All rights reserved.