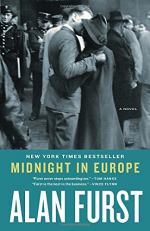 Alan Furst
This Study Guide consists of approximately 41 pages of chapter summaries, quotes, character analysis, themes, and more - everything you need to sharpen your knowledge of Midnight in Europe.

This detailed literature summary also contains Quotes and a Free Quiz on Midnight in Europe by Alan Furst.

The following version of this book was used to create the guide: Furst, Alan. Midnight In Europe. Random House, 2014.

It is 1937 and Spain is being torn apart by civil war, instigated by Francisco Franco and his Nationalist forces. The Spanish embassy in Paris -- working on behalf of the opposing, elected Republic government -- recruits a Spanish expatriate named Castillo to do intelligence work for them, even though Castillo is in fact an art dealer. After Castillo is killed on a mission to Madrid, the embassy recruits expatriate lawyer Cristián Ferrar, who agrees to contribute on a part-time basis.

The embassy connects Ferrar to Max de Lyon, an established arms dealer who greets Ferrar in a fancy sports car, and hosts their first of many meetings in a busy Parisian nightclub, Le Cygne. At the nightclub the pair are met by the grizzled ship captain Stavros, and they all discuss the large bribe on top of a current weapons deal that is being requested by Szarny, the Czech man who is on the other side of the deal. A few days later, de Lyon meets Ferrar and gives him a small gun, telling him to train with it before they leave to meet Szarny in Berlin. When they finally meet Szarny at a Berlin nightclub, a Secret Service officer named Lohr, who had been extorting Szarny, takes de Lyon captive. Ferrar goes to the headquarters of the Secret Service, posing as de Lyon's lawyer for the nudist magazine company, and is able to free him.

When de Lyon and Ferrar return to Paris they quickly get to work on delivering the weapons purchased from Szarny, bribing an Estonian officer to lend his name to a trade form. Meanwhile, Ferrar is put in touch with an arresting noble woman, the Marquesa Maria Cristina, through his mother's constant efforts to learn about their family's supposed royal heritage. When the Marquesa comes to Ferrar's office, she is a beautiful woman, and she describes a mysterious legal battle about money that her late husband had loaned out. Soon after, Ferrar meets de Lyon in Poland, where they plan to personally supervise the loading of six freight cars of weapons onto a ship. After the freight cars are supposedly lost somewhere in the vast Polish railway system, they finally track down the freight cars, and de Lyon resorts to holding an engineer at gunpoint in order to bring the train to the port in time.

Ferrar invites the Marquesa to a date upon his return to France. Through the Spanish embassy, Ferrar and de Lyon meet with General Quebral, who indicates that anti-aircraft ammunition is incredibly important for the Republic troops. After meeting with several shady figures in order to figure out how to best acquire the ammunition, Ferrar and de Lyon reluctantly conclude that they must hire a gang to somehow steal the ammunition from a Soviet naval base in Odessa. De Lyon travels to Istanbul to hire the Ukrainian gangster Vadik, who will carry out the operation.

Ferrar and the Marquesa enjoy a weekend together on the French coast, but Ferrar becomes convinced that she is a secret agent for the Franco forces. When he describes this fear to de Lyon, he realizes that the Marquesa perfectly matches the description of the woman who had deceived Castillo. The Marquesa reveals to Ferrar that she is indeed a spy, but he nonetheless attempts to figure out a way to help her transition to a fully civilian life.

In Odessa, Vadik and his gang decide that, due to the tight security on the naval base, they will have to pose as a Soviet military inspection unit, a rouse that successfully frightens the meek man in charge. Once Ferrar secures a ship that will carry the ammunitions away, Vadik convinces the man in charge of the naval station that the ammunitions need to be shipped away. Ferrar and de Lyon join the ship that is carrying the ammunitions to Spain at a port in Romania. After one of the ship's crew members is taken captive at the Greek port of Piraeus, an Italian ship bears down on Ferrar and de Lyon's ship in the open seas, even opening fire. The attack stops when de Lyon is able to shoot out the Italians' searchlight. The ammunitions reach the Spanish Republic troops in Ebro, but the assistance still does not change that they lose the battle to Franco. De Lyon and Ferrar discuss what they will do during the seemingly inevitable war on the horizon, and Ferrar leaves for New York City to reunite with a former lover.

More summaries and resources for teaching or studying Midnight in Europe.