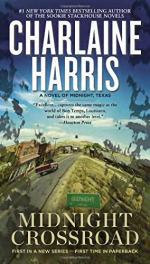 Charlaine Harris
This Study Guide consists of approximately 75 pages of chapter summaries, quotes, character analysis, themes, and more - everything you need to sharpen your knowledge of Midnight Crossroad.

The following version of this book was used to create this study guide: Harris, Charlaine. Midnight Crossroad. Gollancz, 2014. Kindle Edition.

Manfred Bernardo is a psychic who is relocating to Midnight. When he arrives, his landlord (Bob0) and another neighbor (Joe) help him move in his belongings. The men take a break and go to the local restaurant where Manfred meets and learns about the people in the town. He returns on another evening with another neighbor, Fiji. While Manfred is there he learns that a vampire named Lem also lives in the town. Manfred meets Olivia, a woman he has seen but not actually met until now. There are also two men in the restaurant who are not residents. Lem, Manfred, and Olivia take an interest in the two men and wonder who they are watching. They conclude that they are watching Bobo and Lem thinks that it may be because of Bobo’s girlfriend who recently left him, Aubrey.

Not long afterward, the two men pay a visit to Bobo at the pawnshop just as he is closing. They think that his grandfather, who was the head of a hate group, told Bobo where he hid an arsenal of weapons before dying. Bobo claims that he does not know where they are and he is prepared for the men to beat him up, but Olivia and Lem intervene, kill the men, and save Bobo. The only other person who knows that something went on that night is Fiji, but it is not until later that she learns why the two men were in the pawnshop and what happened to them.

The residents of Midnight go on a hike that will culminate in a picnic that Fiji planned. The picnic is short-lived, however, as Fiji soon finds Aubrey’s corpse. The police arrive, and the residents discover that Aubrey had lied to them about her past. She was in fact a widow and her deceased husband had been a member of the MOL. The police find a gun near the body and Olivia recognizes it as being from the pawnshop. The police investigate the cause of death and even though Aubrey’s family initially think that Bobo killed her, and so does Price the leader of the local MOL group, the police do not view Bobo as a suspect because she was not shot. The impact with a truck killed her.

While the murder investigation continues, Price still wants to know where the weapons are and he sends two more of his men to find out. They attack Bobo and Manfred as they walk home after having dinner at the home of two other residents, Joe and Chuy. The attack happens in front of another resident’s, Shawn’s place of business (Gas N Go). Shawn and his daughter Creek come to help Bobo and Manfred. Shawn calls the police, but is nervous and does not want to be included in the police report. The police arrive and the sheriff has the two men arrested. Before they go, however, the two men talk about the missing men who came to question Bobo the night they were eliminated by Lem and Olivia. Everyone says that they do not know anything about these men.

Afterward, the sheriff comes to give Manfred an update on the assault case. While he is there, he mentions that one of the men had been involved in the fight at the Cartoon Saloon, but the man had not pressed charges. This makes Fiji curious and she convinces Manfred and Olivia to go with her to the saloon to talk to the man. They go and the man informs them about Price, telling them that he is the head of the MOL. He also gives the location of the MOL headquarters. He had not filed charges because Price and his family are so powerful. Shortly after Fiji, Olivia, and Manfred find the ranch, the place burns down. The arson investigators find evidence that the two men whom Olivia and Lem killed had set the fire.

Price is still determined to discover the location of the weapons and to avenge Aubrey’s death. So, he kidnaps Fiji thinking that he can get what he wants if he has something that Bobo wants. Mr. Snuggly, Fiji’s familiar was there when Price came to kidnap her. Mr. Snuggly visits the Rev, another member of the community, and tells him what happened. Bobo and Manfred, who realize that something is wrong, also meet with the Rev. When Lem wakes up, they go and look for Fiji. It is Mr. Snuggly’s job to find her.

Meanwhile Fiji has managed to get away from Price and is with Price's parents who do not condone their son's actions. Fiji talks too much. She must use her spell of freezing people to escape. As she runs away, she runs into the rescue party from Midnight.

When Fiji is back, safe in Midnight, most of the town’s residents try to determine who killed Aubrey. When the sheriff comes and says that a truck killed her, they realize that it was Connor who killed Aubrey because he had his father's truck on that night. It turns out that Audrey had a habit of flirting with the men in the town and she had even played games with Connor, but they had made him mad. Connor had killed before and his actions are why his family is in Midnight. Since nothing can be done to stop Connor from killing again and he will most likely do so, Lem kills him. Afterward, the remaining members of the Lovell family leave town. Creek calls from her new home and says that she and her father are okay.

After a Halloween celebration at Fiji’s house, Bobo decides to reveal that he has had the weapons all along. He had kept them hidden because he did not want people to know that his grandfather really was as bad as people said. Also, he did not want them to fall into the hands of the hate groups. The members of the community are disappointed in him, but they all promise to keep his secret.

More summaries and resources for teaching or studying Midnight Crossroad.