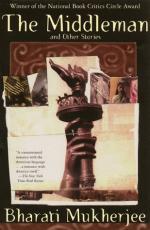 Books Like The Middleman by Bharati Mukherjee | Suggested Reading

Bharati Mukherjee
This Study Guide consists of approximately 35 pages of chapter summaries, quotes, character analysis, themes, and more - everything you need to sharpen your knowledge of The Middleman.

The Middleman and Other Stories (1988) by Bharati Mukherjee. Mukherjee's second collection of short fiction and winner of the 1988 Book Critics Circle Award for best fiction.

Jasmine (1989) by Bharati Mukherjee. Mukherjee's third novel, based on the short story "Jasmine," which originally appeared in The Middleman.

Mukherjee's fourth novel, The Holder of the World (1993), traces the lives of two women living in different centuries whose fates meet over a famous diamond called the Tear Drop.

Leave It to Me (1997), Mukherjee's fifth and most recent novel to date, is about a woman's search for identity.

Days and Nights in Calcutta (1977) by Bharati Mukherjee and Clark Blaise, traces Mukherjee and her husband's differing perspectives during a visit to India in 1973.

Charlie Chan Is Dead: An Anthology of Contemporary Asian American Fiction (1993), edited by Jessica Hagedorn with an introduction by Hagedorn and a preface by...

More summaries and resources for teaching or studying The Middleman.

The Middleman from Gale. ©2005-2006 Thomson Gale, a part of the Thomson Corporation. All rights reserved.